Couple together until the end 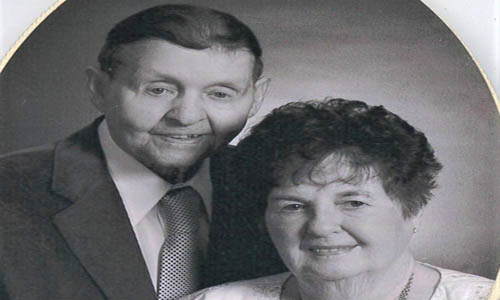 Ted and Carolyn Burleson were married for more than 70 years, and they were together until the end.

Ted and Carolyn Burleson were married for more than 73 years. And last Sunday, they left this world much like they spent their life: together.

While it is unclear if 91-year-old Ted and his 90-year-old wife, Carolyn, knew they were in the same room, family members say it was the best outcome possible under the worldwide pandemic of COVID-19.

“I didn’t want them to be in any pain,” son George Burleson of Albemarle said. “It’s just a blessing they could go ahead and pass on together if they were hurting.”

Darlene Burleson, George’s wife, explained that her in-laws had been in the assisted living side of Stanly Manor since late 2018.

Carolyn had a stroke on April 6, 2018 and went to the nursing home for rehabilitation. She couldn’t get her strength back to walk. Darlene said they dropped Ted off every day to see his wife until Sept. 15, 2018, when he fell and hit his head. That led to his admittance to the facility.

They were together until early this month. Carolyn contracted a urinary tract infection and was sent to the hospital. George said his mom tested positive for COVID while there. His dad, who initially tested negative for the virus, later tested positive.

“If they’re going to die, they need to be together,” Darlene said. “I’m just hoping and praying that they knew they were in the room together. They were incoherent and weren’t talking, but you always figure they can hear.”

George said the family stood on the porch and talked through a window screen to his parents.

“When we spoke to them, when George spoke to his mom, she kind of opened her eyes and turned her head, like she acknowledged him being there,” Darlene said. “[His dad] cracked his eyes and tried to say something, but nothing verbally came out.”

“I’d love to have gone in there with my momma and daddy, but I just know if I get that stuff I may not make it,” added George Burleson, referring to COVID-19. “People need to be careful and quit being a fool about these masks and all. That stuff will get you, especially if you’re 91 and 90 years old. There’s not much you can do unless the good Lord wants you to beat it.”

Darlene said the couple did not talk much about their wedding or anniversaries, but George believes he knows how they stayed together so long.

“If you’re not with each other all the time, you don’t fuss too much,” he said. “The Burleson family has always been real tight together.”

His father was a farmer, raising dairy and beef cows and farming hundreds of acres of land through Burleson Brothers Farms, which he co-owned. He also co-owned Burleson Square with his brother, J. Brice Burleson, up until a few years ago. He was one of six children who were raised by their mother after his father died when Ted was 7. He joined the Merchant Marines during World War II.

His mother was a teacher for around 40 years, at Oakboro and later at Endy. She later operated the flea market under Burleson Square for many years.

“I’ve had a momma and daddy for 72 years and to lose them both in the same day is a shock, but at least I know they are not hurting anymore,” George said.