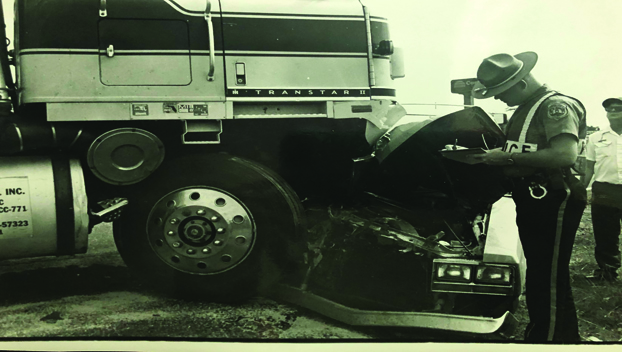 Albemarle police officer David Hunt is shown here investigating an accident in front of Sonic on the N.C. Highway 24-27 Bypass in the 1990s. Hunt has now retired after 30 years of service to the state.

David Hunt has traded in his firearm for his family.

Not many people can say they retired at 48, but Hunt is now experiencing that.

He recently retired from Albemarle Police Department, where he spent the bulk of his 30 years of service within the state.

Hunt witnessed law enforcement from many angles, finishing with the rank of captain for the training and accreditation division.

Besides training, the last few years many people saw him conduct presentations within churches and businesses in reaction to a string of mass shootings across the country.

Hunt worked as a communications officer and patrolman, he wrote tickets and worked wrecks as part of the traffic team and participated in Click It or Ticket campaigns and DWI checkpoints in the years following.

He left APD in 1997 to work for five years with the state as a probation and parole surveillance officer.

“This job allowed us to start a family since we both were working swing shifts at the time,” Julie Hunt, his wife, wrote in a Facebook post about his retirement. “He worked with some of the finest, funniest and best people who became his close friends, Robert Scarboro, David Poplin and Jim Lowder.”

David Hunt returned to APD in 2002 after their second child was born.

“He was missing being the police officer that he had always wanted to be,” Julie said.

During this time, he returned to school to get his degree in criminal justice. 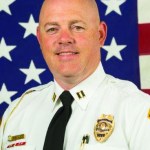 This was also when he served one of his favorite roles at APD, that of a school resource officer. He interacted with students at North Albemarle, East and Central elementary schools for four years.

“That was a really good time just because of the opportunity I had to interact with the kids and provide a positive role model for them,” Hunt said. “The school administrators were great. I had a good relationship with those folks.”

“I remember him being this kind, even-tempered individual who students flocked to,” Pennington said. “You could always count on Officer Hunt to be the calm, composed responder to a crisis. This never changed as I returned to my current position and even when I served as principal at AMS. Officer Hunt was Capt. Hunt by this time. There was never a time he didn’t respond to a request to help. Whether it was to place a SRO at a school when there was a prolonged absence or to participate in safety training, Capt. Hunt always kept the safety of our students and staff at the forefront of his decisions. Capt. Hunt served the students, staff and community of Albemarle well. He will be missed.”
One of the more memorable incidents of Hunt’s career actually happened at the beginning of this year.

On a wet Saturday in January, Hunt climbed to the roof of the police department to raise money for his good friend Mike Martin, a former police officer who had recently been diagnosed with brain cancer.

Martin, who lost his battle with cancer in March, was a bit of a mentor to Hunt. Martin was the adviser to the Explorer Post in 1986 when Hunt joined it. He was later his supervisor two times before he retired in 2012.

“I was overwhelmed with the amount of support we got through the community,” Hunt said of the fundraiser which generated more than $4,000.

Even though it was a difficult time, Hunt said, it showed how much Martin was respected in the community.

“David Hunt was a pleasure to work with at the Albemarle Police Department,” Police Chief David Dulin said. “His social skills and his standout character gave David the advantage needed to be successful in his career as a police officer. He will be greatly missed as he pursues his next endeavors.”