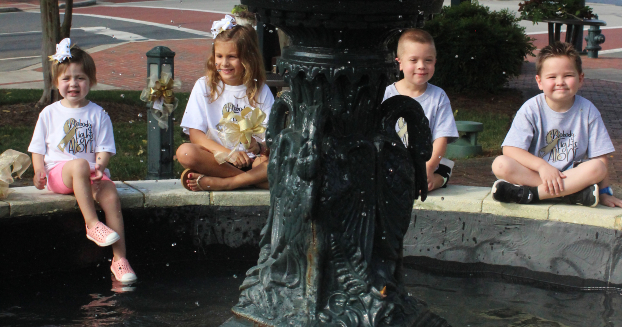 Pediatric cancer patients and their families gathered at Courthouse Square Park in Albemarle Sunday morning to kick off a month of raising awareness.

As September is Pediatric Cancer Awareness Month, gold bows were hung in the square as gold is the color for pediatric cancer, and plans are underway to transform the water inside the square’s fountain to gold by the Albemarle Downtown Development Corporation (ADDC).

Albemarle Councilwoman Martha Sue Hall was in attendance at the event along with Donna Reed, who helped spearhead the campaign to change the fountain.

Hall said the ADDC, which owns and maintains the square, has been looking for a contractor or someone to make repairs to the fountain. Hall had approached the ADDC board in July to dye the water in the fountain gold.

“We’re hoping this will be the kickoff for pediatric cancer awareness,” Hall said. “It was wonderful to see these parents and children out.”

ADDC Director Joy Almond said leaks were repaired on the fountain which previously had prevented it from being able to run. The ADDC committee purchased the gold bows for Brinn Andrew’s fundraiser as well.

“We thought the bows would add a nice touch to the space around the fountain, plus it would help raise money for a great cause,” Almond said.

Four children who have battled or continue to battle the disease were in attendance with their parents: Joel Gardner, 5, Brinn Andrew, 3, Stella Senter, 7, and Tate Whitley, 6.

The kids wore T-shirts saying “Nobody Fights Alone” with a gold ribbon, which Hall said is a reminder about how children do not fight the disease alone.

Reed said she wanted to do the kickoff to bring awareness about pediatric cancer “because most people don’t know the severity” of the effects of the disease on children and family.

A planned 5K had to be scrapped, so instead Reed and others formed the Brave and Gold team to run in a Charlotte event. Those proceeds will go to the Isabella Santos Foundation which gives money specifically for rare pediatric cancer research.

Mary Senter, Stella’s mother, said the kickoff event and support were uplifting after the pain of going through having a child with cancer.

“You just never imagine (how painful it would be)…seeing so many people that support and help you. It’s a blessing,” Senter said.