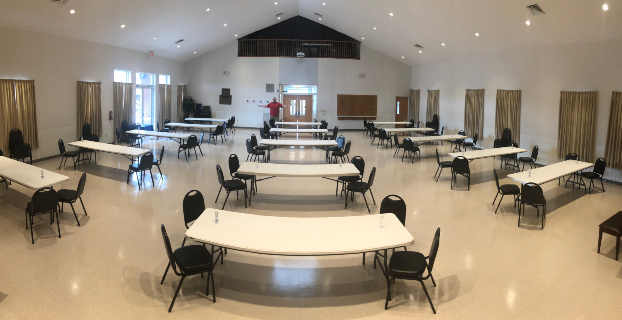 Nate Sisson, minister of students for First Baptist Church of Oakboro, stands inside the fellowship hall, set up and ready to help students. (Contributed)

One church in downtown Oakboro is reaching out to the community to help students with virtual learning.

First Baptist Church in Oakboro is opening its doors Monday through Friday 8:15-10:30 a.m. and 1-3 p.m. to allow up to 30 students to access the internet in its air-conditioned fellowship hall.

Pastor Jonathan Waits said he came up with the idea of opening the church at the behest of a member of his congregation, Stanly County School Board member Jeff Chance.

Waits said his wife, Lisa, who works at Oakboro STEM, noticed the number of kids in the summer who planned to do virtual learning.

“There are a number of students who either didn’t have access at home or maybe reliable internet,” Waits said.

Because of the church’s central location in Oakboro, and with the fellowship hall not being used due to the pandemic, Waits said it dawned on him.

“Why not open our doors and find some ways to make the internet we have available for the community to use?” he said. “How can we look for ways to hopefully alleviate some of the pressure of the new reality that is the school year?”

Tables will be wiped down after use, Waits said, and people will be asked to socially distance themselves from each other and wear masks.

The church’s hours for internet access may also be changing as well. Waits said he has reached out to local principals to see if some students need different hours to be open, possibly in the morning or afternoon. Students will need to be accompanied by a parent or guardian.

“We’re not looking to get anything out of this. We just want to make sure that if this is a need the community has that we are able to take the resources God’s provided us and turn them out so we’re not the only ones benefiting from them,” Waits said.

First Baptist is increasing its internet bandwidth to allow more people to get faster access as well as have strong content filters in place for safety, according to Waits.

He said he hopes it shows folks at First Baptist “really do care about the community that we are in. We’re not just there to do church and keep to ourselves. That’s not what the church has ever been for.

“When church is done right, it’s there for the community.”