Charles Brown was named the chairman of the 17-person North Carolina Rural Infrastructure Authority (RIA). He was also appointed by Gov. Roy Cooper to the Golden Leaf Foundation. 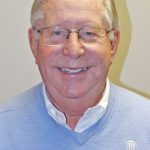 Brown had served on the RIA for a year before being voted chairman by the other members of the board. Board members are appointed by the Secretary of Commerce (one), the state senate and house of representatives (four each) and governor (eight).

The RIA, as per General Statute 143B-472.128, awards loans and grants to local governments for infrastructure projects and is a part of the Department of Commerce.

Recently, the RIA reapproved a $250,000 grant to the town of Norwood for a new tortilla factory. (See story: https://www.thesnaponline.com/2020/08/23/new-norwood-tortilla-factory-receives-grant/)

“We partner with counties and municipalities to be a meaningful partner in enhancing the economy in rural North Carolina. Much of what we do is predicated on job creation,” Brown said.

Brown also received a letter from Cooper confirming an appointment to the non-profit Golden LEAF Foundation which distributes money from the 1998 Master Settlement Agreement with the manufacturers of cigarettes. The group’s state mission, per its website, is to “increase economic opportunity in North Carolina’s rural and tobacco-dependent communities through leadership in grantmaking, collaboration, innovation, and stewardship as an independent and perpetual foundation.”

Saying he did not seek the chairmanship, Brown said he was honored and flattered to receive both selections. He said the RIA “has been extraordinarily important in the lives of folks in Stanly (and) most folks don’t realize it.”

Brown added he will do his best “to do the job that needs to be done to lead that board.”