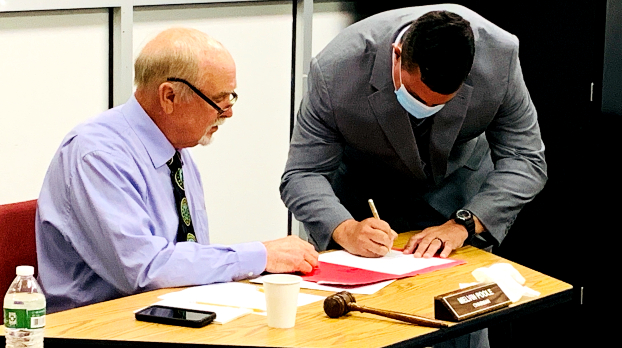 Dr. Jarrod Dennis, right, signs his contract with Stanly County Schools next to chairman Melvin Poole at Tuesday's meeting of the school board. (Photo by Charles Curcio/staff)

Dennis, who went to Oakboro Elementary through eighth grade and graduated from West Stanly High School in 1995, comes to SCS after working as an assistant superintendent and later the deputy superintendent for Person County Schools.

The new superintendent went to the University of Lynchburg for his bachelor’s degree in psychobiology and a master’s degree in school administration from N.C. State University. He earned an education specialist degree from East Carolina University and his doctorate in educational leadership from Liberty University.

Dennis began his teaching career at Forest Hills High School then served in Iraq with the N.C Army National Guard. Dennis was an assistant principal at Northern High School in Durham and was a principal for Orange Charter School and later at Person High School.

Initially, Dennis said he has some goals in mind for SCS, adding as far as schools go, he is “about having choices and personalized learning.”

He said his family will be “invested in the community.”

He said one reason for taking the position included his children being able to go to school in the Stanly system.

“I feel like I got a really good education and I had a lot of good experiences in school,” Dennis said, adding he was involved in high school athletics having played football for West Stanly. “I would like my children to have the same experiences I did. I’m going to be very vested in making sure that everyone’s students, not just mine, get the best education they can.”