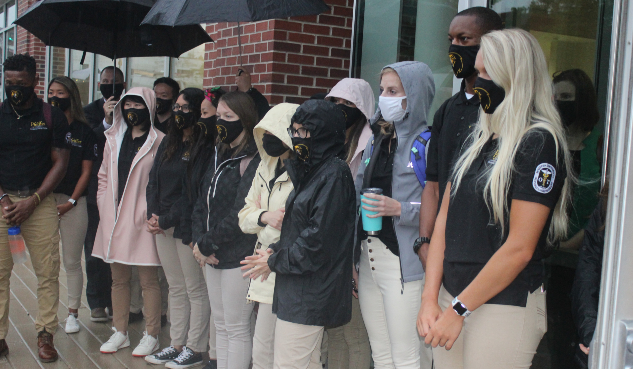 Pfeiffer University occupational health students stand outside the university's new downtown building in Albemarle before classes started in the fall of 2020. (Photo by Charles Curcio/staff)

It has been four years in the making, but Pfeiffer has gone downtown.

In a partnership between the city of Albemarle and the university, students of the school’s occupational therapy and physician’s assistant program had their first classes Thursday morning in the new building in downtown Albemarle.

City officials, members of the Albemarle City Council, Rep. Wayne Sasser and Pfeiffer officials conducted a brief ceremony outside the front entrance of the new building off Main Street despite rain showers.

Interim provost Michael Thompson honored students outside the building, saying Pfeiffer was “most certainly appreciative of everyone in the community who has made this effort possible.”

“It could not have been down without community partnership … without the leaders of this academic program and the vision of county and city leaders.”

“You are history today,” Albemarle Mayor Ronnie Michael said about the first students studying in the new building. “You will be remembered for the future of what our downtown becomes.”

“Instantly within a moment’s time, the persona of Albemarle has changed from a former textile town to an academic community. Things can’t be better for our town than what we are experiencing right now,” Bramlett said.

“Albemarle is Pfeiffer. Pfeiffer is Albemarle. The future is tied together…it’s not over. There’s going to be more to follow this,” he added.

Sasser said the new Pfeiffer medical programs in Albemarle are important not just to the county but the state as well. Students will be spending the next two years in the city and as a group, Sasser said Stanly citizens “will be the beneficiaries” of their presence.

Having lived in Stanly for 50 years, Sasser said buildings like the Pfeiffer campus in Albemarle will still be here 50 years later and beyond. He said the new building gives young people the chance to work in healthcare, which is a nationwide issue.

Councilwoman Martha Sue Hall said the new Pfeiffer building “is a true example of a triple P: public and private partnerships…this is just the beginning of the partnership with Pfeiffer downtown.”