After many years spent treating patients in Stanly County, one doctor has thrown his hat into the political arena.

Dr. Eric Johnsen spent 38 years working in family practice in Stanly, will take on Peter Asciutto for the open seat in District 5 on the Stanly County Board of Commissioners. 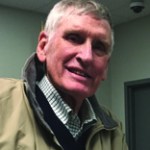 In his medical practice, Johnsen practiced various types of medicine from delivering babies and taking care of infants to children, adolescents, adults and the elderly. He was also a doctor at Pfeiffer for 23 years.

Johnsen served in the Army and was a leader for a 50-caliber machine gun squad in Vietnam and Cambodia. Being in the military “helped me grow up a lot and learn to make decisions” as well as the ability to “shoulder a lot of responsibility.”

A lifelong Methodist, he and his wife Judy have taught Sunday school for 39 years. Johnsen has served the community on boards for the Stanly County YMCA and Uwharrie Bank. He also coached youth soccer, baseball and basketball for many years.

Johnsen said he was approached to run for the Board as an unaffiliated candidate if he could get 2,000 signatures on a petition, which he did.

Running for office reflects his life of service, Johnsen said, adding as a doctor one serves other people.

“I felt that in this role (of commissioner) I could help serve the people of Stanly County,” Johnsen said.

His approach to the position, he added, will be much like a doctor making a diagnosis on a patient.

“As a physician, you have a problem and you try to identify the problem and review as much objective evidence as you can, come to a conclusion and then find a solution,” Johnsen said.

Making Stanly a better place to live, he said, was one of the main issues for him, along with citizens’ safety.

“I am not bringing into this any agendas, any personal interests in this. I will address issues as they come up,” Johnsen said.

His vision for the board, he said, was for it “to always do the right thing.” He said he wants to work with the other commissioners and “keep a very open mind to changes that need to be made as a community and to retain things that are beneficial to the county.”

Johnsen said he loves Stanly County and looks forward to serving it as commissioner.