Community reaches out to shut-ins with flowers, message of hope 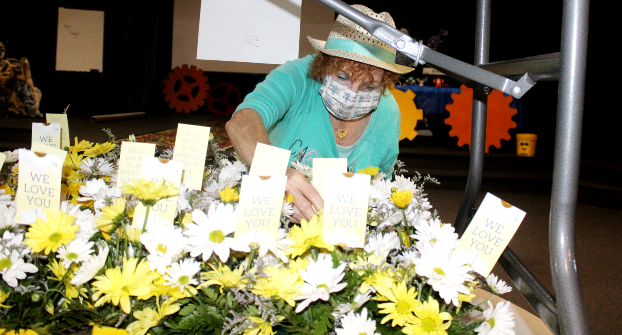 Patty Shannon adds cards to bouquets for delivery this weekend to the various long-term care facilities. (Photo by Charles Curcio/staff)

One church in Stanly County recently tried to add a little color to the lives of long-term care residents.

Rev. Stacy Sanders of First Assembly Church in Albemarle and members of the church combined their efforts to deliver flowers to residents of facilities in the county.

Sanders said the idea came to him after going home to a funeral and speaking with a friend who works for Hospice in South Carolina about COVID-19.

“She said these folks are dying, but they’re not necessarily dying from COVID. They’re dying because they are lonely,” Sanders said.

Because of the time apart many residents have had from their families in the pandemic, they have become disconnected, which Sanders said broke his heart.

The idea for giving flowers to residents was one Sanders said he had last year but transitions in the church did not allow the project to move forward.

However, the relevance of the project came through more clearly in the pandemic when Sanders said he saw a post online regarding a florist in Dunn doing something similar.

Supplies for the project came from other church members like Becky Clark, owner of Designed Memories, a florist shop in Albemarle.

Sanders said he believes people have an awareness of how much they need each other during these times of the pandemic, especially after many stayed at home for the first few months with the stay-at-home order.

“As things begin to open up, we learn to appreciate those little times when we can be together, even with a mask on and socially distanced,” Sanders said.

He added the time also brought an extra awareness for many of those who are still isolated and the only human contact they have are their caregivers.

“I thought this could be one little way we could make some point of contact to let them know they’re not forgotten.”

Each basket had a card with it saying “We Love You” on one side and a Bible verse on the other, Psalm 49:16.

“I thought that little passage of scripture was a perfect way to say not only we as a church or people in the community have not forgotten, neither has God forgotten,” Sanders said. “I hope either they read the card, or the folks taking care of them (get) a little bit of hope and encouragement.”

The minister said he was grateful to the facilities for their help in getting the bouquets to residents because long-term facilities are in quarantine and do not allow visitors.

He also thanked Jan Goetz, a clinical liaison for Community Homecare Hospice, for her help, adding that around 20 people participated in the project.