ELECTION 2020: Lewis wants to give voice to town

In the election race for the two available seats on the Oakboro Town Council, one native of the county looks to take office for the first time. 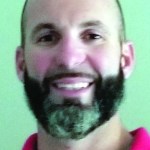 Jesse Lewis, running against incumbents Chris Huneycutt and Latoya Jackson along with newcomer Lanny Hathcock, was born and raised in Locust but lived his teenage years in Wilmington.

Working for the trucking company Praxair, which works closely with Corning in Midland, Lewis said another job brought him back to the county. Shortly after he and his wife were expecting their first child, Lewis was looking for somewhere to settle down.

With the growth of Locust in that time, Lewis said the town “did not do anything for us,” so he and his family decided to settle in Oakboro, adding his wife “fell in love with the town.” The couple now have two girls.

Lewis served in the military, enlisting after the first anniversary of 9/11, and began following politics.

He has started an addiction ministry outreach, saying he felt called to serve, with this run for office as another calling after hearing of Charlotte Pipe’s plans for a factory in the town.

“I enjoy service. That’s a principle the military teaches you and I’m passionate about it,” Lewis said.

Charlotte Pipe will be a mile or so down the road from his house, which Lewis said was a reason to run. He said in his time driving a truck he has seen industry come into a small town with varied results.

“I’ve seen (industry) completely destroy a small town because it wasn’t done correctly…with roads, congestion, etc. Then I have seen small towns completely flourish, with schools, parks and recreation, a better quality of life,” Lewis said. “I felt there is a major part of our community that is not realizing how much of a change is about to happen.”

Lewis is running because he wants to make sure people in the town and community have a voice, along with having someone “that has got a backbone that’s not afraid to ruffle some feathers, not afraid to stand out for what’s right.”

The candidate said he does not want to see special interests come into Oakboro and push around the town’s people or local politicians just to benefit the company.

“I want to see Main Street keep its character and at the same time enjoy the benefits with the boom of an industry coming in,” Lewis said. “There’s got to be an ebb and flow with it.”

Lewis said he sees in his mind the productive way for people to flourish is to pick the right people in the positions to make the right decisions.

He said he wants to “make sure the people of this town educate themselves on the issues…I want them to make sure they elect the people that have the (town’s) best interests at heart,” Lewis said.

The candidate added he would like to see Charlotte Pipe to bypass Main Street and allow the town to grow and “keep the main street charm.”

Lewis said he has a proven background of selfless service and volunteerism both ministering and volunteering in the community when Oakboro’s school reopened.

There may be no college degree or education which qualifies one to serve on the town board, but Lewis said having the community’s best interests in mind does.

“(In) the next four years, the town will see more growth than it has in 100 years. Whatever comes across the mayor’s desk and needs to be voted on, I want to be sure the people of the town…that people are supposed to have a voice on have a voice.”

He said he “wants to make sure…nobody from the outside is able to come in and take the voice away from the people in my town.”