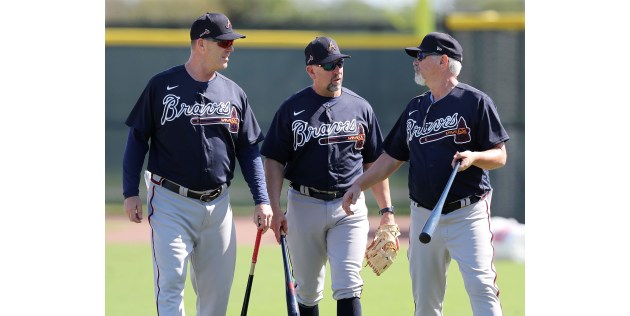 Pfeiffer alumni and other Stanly residents have a particular interest in the Atlanta Braves for specific reasons since 2016 when a former Falcons coach joined the team.

Four years later, Marty Reed and the Braves have three straight divisional titles under their belts and look to make a run in the upcoming playoffs starting Wednesday.

Reed coached the Pfeiffer baseball team until 1999, where he then worked his way through minor-league baseball. He first started in the Los Angeles Dodgers’ organization as a pitching coach for six years, then serving as the minor league pitching coordinator until 2008.

The next season, Reed joined the Braves’ organization as the pitching coach for the Mississippi Braves. He moved up to the AAA Gwinnett Braves in 2009 then joined the major-league staff seven years later.

Reed serves as the bullpen coach for the Braves and said preparing relief pitchers to enter the game is one of the most important parts of his job. He lets relievers know about the three batters they will face with the new rule in place of a three-batter minimum for pitchers, giving them a rundown of the scouting report for the hitters he will face. Reed said he also gives pitchers the situation, with whom is on base and which players are potential base-stealers.

“I monitor the number of pitches he throws, so he doesn’t throw to many pitches as the situation can change in one pitch,” Reed said. “These guys are the best in the world at what they do; you are constantly managing their intensity level as well as the information they receive to send them in the game 100 percent prepared with no stone unturned.”

Part of that preparation is spending “hours upon hours” watching video of the swings and tendencies of opposing batters to prepare scouting reports for the entire pitching staff on batters. He also helps to refine a pitcher’s delivery ”in order to put the best product on the field,” he said.

The Braves’ recent success in the division, Reed said, came from “good players and a tremendous working relationship with the coaching staff. You need to have good players to win, and you need those players to buy into the plan set forth by the staff.”

Atlanta has added better players in the last three years than the first two, he said, adding the players “have followed the lead of the staff and worked tirelessly to improve even when they were already pretty good. Each area of the team has continued to improve from outfield and Infield play to pitching and hitting. Everyone has been selfless and dedicated.”

Like other professional athletes and coaches, times have been different this season because of the COVID-19 pandemic.

Despite only playing 60 games, Reed said the season has still been a grind and made it feel like more than a normal, long season.

The Braves’ bullpen coach said many protocols are in place for coaches and players entering the park. Along with saliva and temperature tests every day, Major League Baseball has monitors in the clubhouse and on the field to ensure coaches are wearing masks at all times.

Normally, staff would get to the ballpark at 12 p.m. for a 7:10 start but now staff can not enter the park until five hours before the start. Video rooms are off-limits, so all video work happens via computer. Pregame meetings, normally groups of 10 or more, are smaller meetings because players and coaches can not gather in one place.

Travel, Reed said, is different because of wearing masks, using sanitizers and other necessary precautions which “completely changes our normal, everyday routine.”

Playing in front of empty stadiums has also been difficult, Reed said, adding the fans “provide so much energy to the stadiums and players feed off of that energy.”

The coach said the cardboard cutouts at the stadiums have been great. He quipped that the cutouts “don’t yell at you” but added it gives the feeling of having fans in the stadium.

“It’s funny because some fans who are season ticket holders you recognize since you normally see them at every game and you inadvertently wave at them by habit,” Reed said.

This season, Reed said, will always have an asterisk before it in his mind saying “you can’t duplicate the consistency needed for 162 games in 60 games. It’s just not the same.”

When Reed sits back and thinks about his long coaching career, he said he feels humbled and blessed, realizing “there are only 29 other people in the world that have the job of Major League Bullpen Coach.”

He added he was fortunate in college to win two national championships and had three appearances in the MLB playoffs so far, but said it’s “the people you meet and impacted are what drives you.”

“I often get text messages from these players thanking me for being hard on them when they needed it and also being there for them in times of trouble. You form a special bond with these players because you are around them so much. It’s important to conduct yourself properly and set a good example for them to follow.”