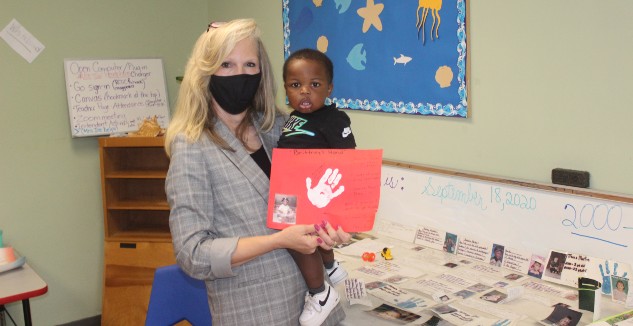 Kelley Huff poses with Bryson Neely, the son of a former student at Richfield Child Development, Brittney Neely, while looking at artifacts from the 2000 time capsule. (Photo by Charles Curcio/staff)

Marking the passage of time was something important to Kelley Huff 20 years ago.

Kelley, the director of Richfield Child Development Center, and her husband, David, recently opened a time capsule buried 20 years ago when the company was just over four years old after opening Aug. 12, 1996.

Providing daycare and educational services for children as young as 6 weeks old to 12 years, Kelley Huff said she wanted to do something different back as the 21st century dawned.

“We got together and put our pictures, hopes and dreams for our children 20 years down the road,” Huff said.

Her children, Maddie, Matt, Katie and Jenna, were 16, 14, 11 and six, respectively, at the time when the capsule was put together.

When opening the capsule along with her husband, Kelley said the messages from kids reminded her of a wonderful time in her life.

“I was raising my own children, but also had children here at my dream, which was to run a childcare facility,” Kelley said.

Opening the capsule and seeing the faces of children who are older now with children of their own, some of whom go to her facility, just showed to her how fast time flies, she said.

“We need to treasure each moment and that’s very difficult in this time we are living in now because life is just so difficult,” Kelley said.

Working in childcare in 2020 has been crazy, she added, with the new rules due to the COVID-19 pandemic.

She may have to greet parents on the steps of the facility and take their temperatures just to have them walk down the hallway, but “nothing has changed in the way that we love our babies.”

Her affection for the students and families along with her staff has helped the business last into its 25th year of existence.

“If you own your own business you put your heart and soul into it. I live here…11 to 12 hours a day I’m here,” Kelley said.

She has never missed a day during the pandemic, still greeting her children on the front porch every day. The staff has to make her take a vacation, she said.

The facility “is my fifth child,” she said, adding “these children are my children.”

Many of the children have connections to places nearby like Pfeiffer University, which is just up the road from RCDC. Kelley said many of her students, like Zachary Domenech, son of former Falcons women’s lacrosse coach Julian Domenech, went to Kelley’s daycare.

A number of her former students still keep in touch with her via social media, Kelley said, or by text.

Her son, Matt, has also been helping students at the center who are doing remote learning.

Richfield Child Development has also collected items for a time capsule for this year to be opened 20 years from now. She said the reason was people “need to remember everything we have gone through.”

The future of the center may see a new person in charge, Kelley said, hinting a new director could take over in the spring of 2021: her youngest daughter, Jenna.

“They’re probably going to have to push me out the door. It’s just going to be very difficult for me to give up my fifth child. I think I’m always going to be here.”