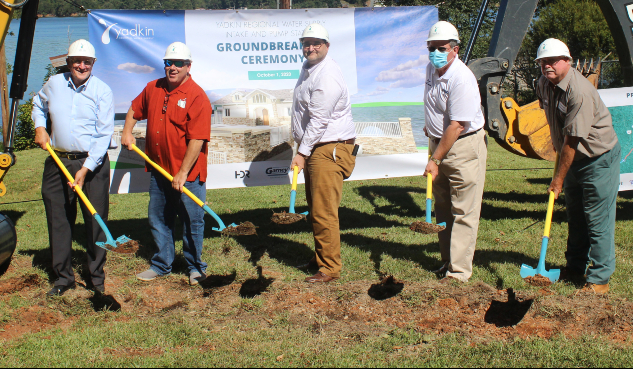 A new cooperation between neighboring counties will soon provide water for many residents living in a landlocked area.

Public officials and staff members from Stanly and Union counties along with the town of Norwood gathered Thursday afternoon at the Norwood pump station on 465 Bay Shore Dr. for a groundbreaking ceremony for a new pump station.

As part of the Yadkin Regional Water Supply Project, the existing pump station will be renovated into a new intake facility, which will connect with a 30-mile pipeline from Norwood to a new treatment facility in Union County.

The pipeline when constructed will bring water to the facility which would be connected to another 10-mile pipeline inside Union to bring water to utility customers in the Yadkin River Basin.

The project was necessary, according to information on the project’s website, due to the county having no natural water supply and trying to meet the population’s need for water especially in peak demand months during the summer. Union relies on other places for its drinking water, including a deal with Lancaster County Water and Sewer District in Lancaster County, South Carolina, for water in the other half of the county.

Norwood’s intake station has not had a renovation since the 1980s and the town “needs a modern, higher-capacity water intake facility and pump station,” according to officials.

Described as a “win-win-win” situation by Norwood Town Councilman Wes Hartsell for Norwood, Stanly and Union, the new station can provide the portion of Union in the Yadkin River Basin with up to 16 millions gallons of clean water per day. The station’s permits allow for Norwood to have up to 600,000 gallons of water per day and 1.2 million for Stanly, for a total of about 18.3 million gallons.

John Shutak of Union County’s Public Works Department described the new station as having two intake valves 72 inches in diameter at different distances from the shoreline and elevations in the lake. He added the valves “will allow for operational flexibility as conditions in the lake change over time.”

A 50-foot deep well will be excavated and constructed on the site. Raw water goes to the existing Norwood treatment plant just up the street and will eventually travel through the new pipeline to the new Union treatment plant.

Hartsell also said Norwood and surrounding areas “rely on the lake for drinking water and hydroelectric power.” He added the new station will only affect the lake level less than a half-inch a day only a few days of the year.

“Less than 1 percent of the daily inflow…will be taken out of the lake in the day, and this is inclusive of the all the water taken out by Norwood, Stanly and Union County,” Hartsell said. “What will be different? Really nothing.”

The council member added the project will not impact homeowners living on the lake, including boat ramps and fish habitats, “even in areas of extreme drought.”

“No matter which community we call home, access to water is the foundation of our well-being and our quality of life,” Norwood Town Manager Scott Howard said.

Union County Manager Mark Watson said the project will “create a beneficial water supply partnership that adds to the resiliency of our region.”