A former standout during the championship years of South Stanly baseball has his first high school head coaching position.

Heath Blackmon, who was on the 2009 and 2012 1A state title teams for the Rebel Bulls, recently announced he was the new head coach for the Hickory Grove Christian Lions in Charlotte. 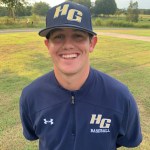 The new head coach was a freshman in 2009 when the Bulls claimed the state title and was an integral part of helping South appear in back-to-back state championship finals in 2011 and 2012.

“I always had the desire to one day be a head coach,” Blackmon said, adding his teammates on South said he would be a coach one day.

Looking back at South’s title teams, Blackmon said he and his teammates had played together for years and always had the goal of being great at the high-school level.

Blackmon said the run to the finals his junior year was unexpected after having lost three in a row to head into the state playoffs. Losing to East Columbus in the finals, he added, helped spur the team back to the finals the next season where South swept Voyager Academy.

Head coach Terry Tucker said Heath was a leader for South in his junior and senior seasons as the team’s everyday catcher, as well as pitching in the 2012 title-clinching win at the home of the Durham Bulls.

“I always knew that Heath had the ability to coach one day with his leadership and knowledge of the game. He is a great asset to their program and I think he will do great things there,” Tucker said.

The new Lions coach said the team’s morale and feeling in the clubhouse which made them successful will influence how he coaches. He said South had players with different roles on the team which helped the Bulls be successful.

Blackmon played some college baseball at Brevard and went on to teach private lessons as well as coach travel baseball before joining Hickory Grove Christian.

He was recruited to coach baseball by a former Forest Hills baseball coach, Jimmie Quesinberry, who is now the Head of School for HGC. In his first season as an assistant coach with the Lions in 2019, the team went from 3-13 to 15-9-1 overall.

Blackmon said he hopes the team can play in the spring because of a group of seven upperclassmen, including several NCAA Div. I prospects.

“The talent was always there. It was just that they needed a culture change,” Blackmon said of the team’s turnaround.