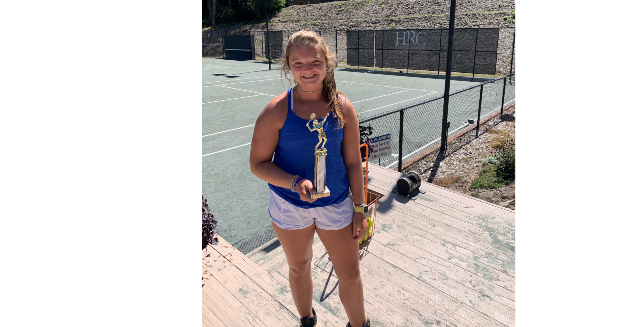 The challenges for high school student-athletes staying at the top of their games has been difficult during the time of the COVID-19 pandemic, with cancellations and changes of the regular athletic schedule becoming common.

One standout athlete at Gray Stone Day has spent time, as many have, competing in events not affiliated with the NCHSAA to stay in shape and stay ready for when high school athletics opens back up in the state.

Emma Bost, who recently won the North Carolina Mountain Fall Junior Tennis Championship in Asheville, went from practicing three to five hours a day on the tennis courts and training in the gym several hours a week to nothing.

Bost, whose 6-7, 6-0, 1-0 (10-4) win over Asheville’s Lindsey Bull improved her ranking in the state to No. 17 overall, missed a chance her junior season in the spring of this year to compete in the state individual tournament after finishing runner-up her freshman and sophomore seasons.

“COVID-19 has had a negative impact on my game. It got me six months behind where I wanted to be right now,” Bost said.

She was in Florida when the initial phase of the pandemic started and the tennis courts were locked. Like many athletes who had no access to a court or field, she said she focused on fitness and training, doing her regular skills she did in the gym and running on the beach to keep her legs strong.

When the courts finally did open, Bost said “it was great to get back on (them),” adding she “spent a lot of time working on getting my timing back to where it needs to be for me to win matches.”

Bost said competition is also important. She said playing live points helps her mental game and gives her confidence by putting her into different game situations.

Like many members in the Class of 2021, Bost said it is important for her to have one more year of playing tennis for the Knights. The revised calendar has the season starting April 12 with practices and the regular season two weeks later.

Bost said her game has grown a lot since last year and she wants the opportunity to take home a state title this season.

“All the players in this level of high school tennis are very talented, but I would like one more year to show what I have, and finally be victorious,” she said. “Coming in second twice and making it to the semis last year leaves me with unfinished business that I want to take care of and bring the Lady Knights a state championship.”