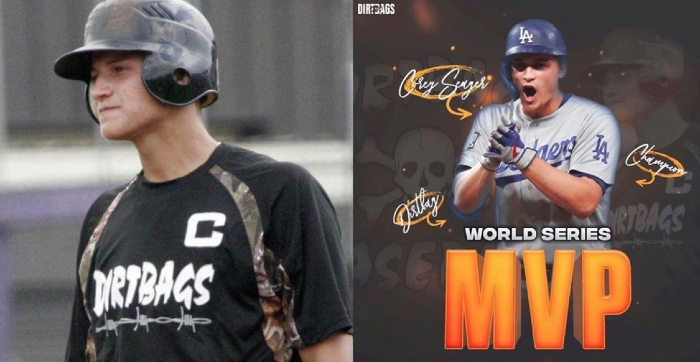 For many former high school baseball players from Stanly, watching the 2020 World Series had the added bonus of saying they played with, played against or coached a member of the World Champion Los Angeles Dodgers.

Seager is one of eight MLB players and three former American Legion players to have won the MVP in the NLCS and World Series.

A first-round draft pick, top prospect and All-Star, Seager played American Legion Baseball for Post 115 in Kannapolis. In the 2020 postseason, he was named MVP in both the National League Championship Series and World Series, one of eight players (and three ALB alumni) to achieve the double-feat.

Zach Almond, the former North Stanly and Catawba baseball standout catcher who has played pro baseball since 2017, played against Seager in 2011 when the team still played home games at A.L. Brown High School.

Almond was a freshman playing senior Legion ball and the team traveled to play at the field which at the time was at the bottom of a big hill with the bleachers and press box far above it.

The former Comet said he remembered people talking about him and his older brother, Kyle, who had debuted in the majors that year. However, when he first saw Corey at the plate, he said he looked like a man playing with a bunch of kids.

“He was 6’3 or 6’4; just a big, big kid. I was like, ‘Holy Cow!’ ” Almond said. “He made the game look easy. When he fielded a ground ball and threw across the diamond, he looked like he barely tried to throw it, but the ball was going like 90 miles an hour.”

Behind the plate, Almond got an even closer look at Seager’s prowess with the bat. Coach Derek Barringer had told Almond and the starting pitcher that day, Almond’s North Stanly teammate Jake Lowder, not to give Seager anything to hit, to basically walk him.

After a couple of breaking balls outside which Almond said did not even budge Seager, Lowder threw one over the middle which the catcher said Seager “hit about 15 miles.”

Lowder said he remembered Seager hitting a backside single off him and then a home run. After teammate Gus Fesperman tied the game with a home run, Seager got up in the ninth and hit a walkoff home run “that was an absolute no-doubter.”

Almond said from that at-bat on, he knew Seager would be playing in the major leagues one day. He said the future Series MVP looked like he was going through the motions, but doing it at such a high level with such little effort.

He recalled another game when Kannapolis beat Stanly 7-6 and Seager produced all seven runs against Post 76 in the loss, including two home runs, one of which cleared the baseball field and landed in the softball field’s infield dirt, which was a long way from the baseball field’s home plate.

Himself being drafted by Arizona in 2017, Almond said “it’s honestly kind of cool” to be able to say he played against a World Series MVP.

Seager was the best player in the state of North Carolina that year, but Almond said he was not a cocky player, but by the way he played and carried himself on the field, “you knew he was legit.”

Watching the way Seager ran off the field, stood in the dugout with his teammates and supported them during games was a good example of how to play the game, Almond said.

Currently waiting to see where he will continue his career in 2021, Almond said it was cool to be on the same stage as Seager.

Lowder added, “From the time he stepped on the field I could tell he was the best player I had played against. When pitching against him, you just hope he somehow misses it. It’s nice to see he does it to the guys at highest level also. I’m a big fan of the guy. It’s a lot of fun to watch him succeed the way he has as a pro.”

One member of the South Stanly state championship baseball teams in 2009 and 2012 had the opportunity to play travel baseball with Seager as a member of the Dirtbags, a travel team.

Stephen Wallace, who reached the state finals three out of his four seasons playing for the Bulls, also played for the Dirtbags and played with Seager for a short time.

Wallace said “you could always tell he was on another level, not just his skill but his competitiveness and overall mental ability for the game (which was) above and beyond.”

“When you get to a certain level of baseball, everyone has the ability and skill to compete,” Wallace said. “It’s the mental game that takes you further; Corey has that. That’s what stuck out to me my short time I played with him.”

Wallace added Seager was “a huge team guy” and he “is the kind of guy you want on your team. (He’s) always picking up everyone and doing what he has to do for the team.”

The Dirtbags posted on social media this week side-by-side pictures of Seager, one as a member of the team and the other from the Dodgers.

A Coach’s Point of View

One person who saw Seager play from the perspective of a coach back in the day is current South Stanly head coach Terry Tucker.

The Bulls’ coach said he was a very versatile player who played shortstop and third base for the team and was “a strong hitter from the left side of the plate.”

“He didn’t play like a sophomore in high school. I knew he was going to do great things one day.”