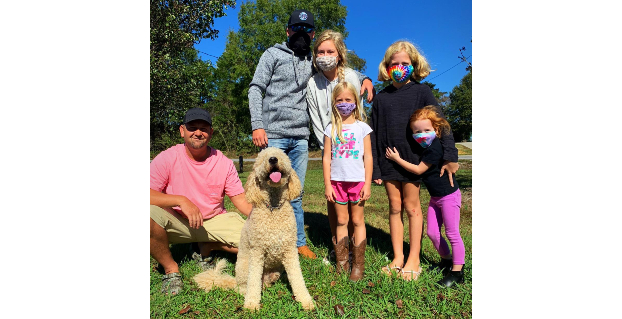 She got clearance to be transferred from the Pediatric ICU at Grand Strand Myrtle Beach to the rehabilitation unit at Levine Children’s Hospital in Charlotte where she will be for the foreseeable future.

Morgan is still recovering from a golf cart accident suffered while on vacation at Ocean Lakes Campground in Myrtle Beach. ( https://www.thesnaponline.com/2020/10/25/stanly-pageant-standout-suffers-traumatic-injury-in-golf-cart-accident/ )

Arriving Friday afternoon, Mandy, Morgan’s mother, said her daughter’s trip went better than expected. She slept most of the way but she was able to see her brother, Jakob, and goldendoodle, Royal, which was the highlight of the trip.

Mandy thanked the multiple teams of physicians, nurses and rehab staff at Grand Strand, saying they were “fantastic.”

Settling into Levine, Morgan will receive physical, occupational and speech therapy for more than four hours per day. She does not know when she will resume school.

A Go Fund Me page is still active, but with COVID-19 people will not be able to send her anything or visit.

“All of that will have to wait until she is home in Stanfield,” Mandy said, adding people’s prayers are welcome to help with her pain and rehab “as Morgan is ready to be back in Stanfield with her family and friends.”