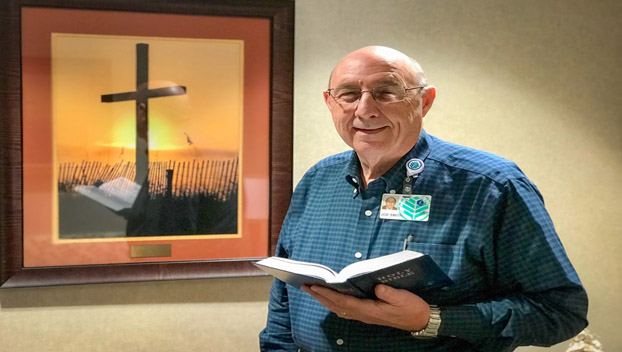 Many of Stanly’s residents have tasted a doughnut from his former restaurant and never knew the sweet man behind the sweet treats of Joe’s Do-Nut Dinette.

Joe Smith, the former owner of the diner and long-time chaplain for the county’s hospital, now Atrium Stanly, passed away this week after suffering complications from the coronavirus.

Smith was a minister for more than 43 years, growing up at Lakeview Baptist Church and then serving for years at a number of churches in Stanly.

He started working at the Dinette when he was 16 and eventually bought the business. In 1985, Smith moved it from the location at 231 S. First St., Albemarle, down the road to 139 N. First St.

The Rev. John Futterer, the long-time pastor of First Lutheran Church in Albemarle, remembered coming to the county in 1995 when clergy took two-week turns serving as the hospital chaplain. Futterer said it was hard to cover the duties and responsibilities of the chaplain because of the hospital’s growth.

Roy Hinson, the hospital president at the time, contracted with Smith to be the full-time chaplain, which Futterer said “was just a great decision.”

Smith visited patients in the hospital and took “just the right length of time” for those visits, Futterer said, adding he would be there for anyone having surgery as well.

Because of his “beautiful prayers with patients” and “wonderful contact” with patient families, Smith “endeared himself to everyone very quickly,” Futterer said.

Futterer also said Smith worked with local clergy as well insisting a patient’s pastor take the lead in a visit, providing support and allowing the family and pastor to bond.

“Joe never wanted to intrude on those sacred and special times,” Futterer said.

For patients or families without a church, Futterer said Smith “was an absolute Godsend. He conveyed God’s presence, strength and healing to those families in such beautiful ways.”

Smith’s presence was felt beyond the hospital walls, Futterer said. Because of people he met in the hospital, Futterer estimated he may have presided over more weddings and funerals than any other pastor.

Futterer, now the pastor at Kimball Memorial Lutheran Church in Kannapolis, said he has worked with chaplains at bigger hospitals but “never met any hospital chaplain who was more attentive and caring and skilled than Joe Smith.”

“I was blessed to know him and call him a friend. He will be greatly missed…but like everyone who knew Joe, I am quite certain that he’s at rest and at peace…and with his Savior.

Beyond ministering to patients and families, Smith was also well-loved by hospital staff members.

Jessica Steed, a nurse anesthetist who worked at the hospital, said Smith was “a dear man” who “blessed my hands more times than I can remember” before many surgeries.

“His presence at Stanly was constant. His children and grandchildren are all of service to others. I still can’t process that he is gone,” Steed said.

She added she has “known people to be shaken to their core and he had helped guide them back to being at peace.”

Another nurse anesthetist, Kelly New, said Smith “was a wonderful man who had a heart of gold. He was always spreading God’s word.”

“He prayed with me before surgery and always comforted me in times of trouble,” New said.

Stacy Talley, the former communications director at the hospital, said Smith “could handle every situation in a way that calmed everyone and put you at ease. He dealt with families concerning death and sickness and also with confrontations at the hospital.”

She added “he was respected by everyone at the hospital and the community. I had to call him many times when he was at home and he never hesitated to come in. He was always there for the hospital staff too. He was loved by all.”

Smith will be remembered for his work as a chaplain and minister, but also for the delightful treats customers have enjoyed at the Do-Nut Dinette.

Shaunda Williams, who works for the City of Albemarle, said she worked at Mann’s, which was next to the Dinette, and pretty much ate lunch there about every day.

“(There’s) nothing like Joe’s for lunch and the atmosphere,” Williams said.

Sweet is the word she used to describe Smith, saying he “has always been the same sweet, gentle, caring, loving, man of God, faithful prayer warrior and just simply a joy to know. I have a hole in my heart like many because of the influence he left on our lives.”

She added there was nothing like eating at Joe’s, and even though it’s under new ownership, “it’s still Joe’s.”

Becky Clark, owner of Designed Memories Florist in Albemarle, had her first job there when she was 14, getting a work permit to work Saturdays while her father worked at the farmers market.

Clark said Smith’s wife, Lorraine, got the permit for her so she could work from 5 a.m. until about 3 p.m. each Saturday.

Smith taught her by example, she said. He was “so gracious” if someone came in just before closing to get something to eat.

One time, she was speaking to a customer instead of sweeping, and he nicely took the broom and did it himself without berating her.

“It was just that quiet way he went ahead and did the job that needed to be done. It convicted me. He never had to do that again…he just led by example.”

She added by him doing that, she realized he didn’t need to do that after working over the grill the whole time.

Now owning her own business, Clark said that story stuck with her as a business owner and she is the same way now.

“I’ll just never forget it…it stuck with me for a reason,” Clark said.

Joe also would give her a little bag of the doughnut holes to enjoy, which are not on the menu.

“He’s just a wonderful human being who loved people.”