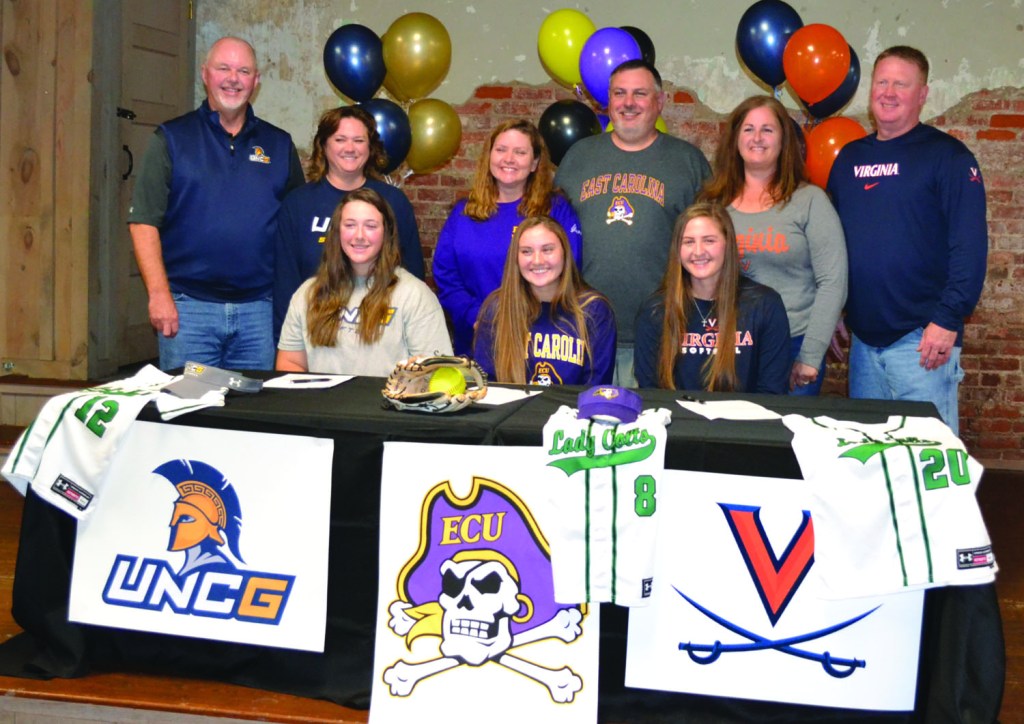 Softball players from Stanly playing in college at the D-I level are not rare, but having three from the same team sign the same season is.

Pitcher Jordan Hatch signed with East Carolina while her battery mate for the upcoming season, catcher Shelby Barbee, signed with Virginia. Infielder Meredith Harwood, who played third base last season, will play next season for the University of North Carolina at Greensboro.

All three players were members of the 2019 Colts squad, which went 28-2 overall and won the Rocky River Conference regular-season and tournament titles along with the 2A state championship.

Fire on the Mountain

The ace of the West Stanly pitching staff, Hatch has been a player sought after by numerous D-I programs since her debut for the Colts in the spring of 2018.

Hatch was verbally committed to Duke for the first two seasons of her career and blossomed in 2019. She was 26-1 on the mound with a 0.53 ERA striking out 348 batters in 170.2 innings pitched while allowing just 63 hits and 33 walks. Opponents batted .130 against her as she won the Stanly News & Press and Rocky River Conference Pitcher of the Year awards as well as the Gatorade North Carolina Softball Player of the Year.

About a year ago, Hatch decommitted from Duke and had a visit to East Carolina in January. She said she wanted to play ball in-state because she liked everyone she met there.

Playing for the Pirates will also allow Hatch to play teams from the power five conferences like the Atlantic Coast Conference, along with high-level teams in ECU’s conference, the American Athletic Conference.

Signing on Wednesday, the first day high school athletes could sign, was important to her, she said, adding she wanted to be officially committed on Signing Day along with her teammates.

Hatch and many of her teammates have stayed in shape after the cancellation of the 2020 season by playing travel ball, which she added “gave us a distraction from everything that was happening.”

Signing to play D-I softball, she added, was special because she and her teammates “have been waiting for it for a really long time.”

One of the biggest bats in the lineup will be moving positions in 2021 for the Colts.

Barbee played third base for the Colts in 2019, winning Hitter of the Year honors from the Stanly News & Press. She was also the state coaches association’s 2A Hitter of the Year from the Western region. Barbee played third base in 2019 when her two-run home run helped lift the Colts to a 3-0 win in the deciding third game of the 2A State Finals series.

Barbee caught West’s three games last season and will be behind the plate for the Colts in the spring.

Virginia, Barbee said, was not really on her list of schools she wanted to attend but her parents had signed her up for a coaching clinic at the school.

After going to the camp and driving around the campus with her parents, Barbee said she “absolutely fell in love with it…you knew it was home.”

Other ACC schools like North Carolina and Duke were interested in her, she said, but the best scholarship offer came from Virginia. She added the Cavaliers’ staff and players were very personable, saying “they felt like family from the first time I met them…they want to make sure you’re OK mentally and physically as a person.”

Barbee said the staff also was like West Stanly head coach Craig Carter and his staff.

“They always want to make sure you’re OK as a person before you as a player.”

Like her teammates, Barbee said she wants to be able to play this spring but said she is not worrying about it day-by-day.

“Everything is going to fall into place as it is supposed to…I don’t know it, but (God) has a plan for me and I just have to live life for Him,” Barbee said.

The third of the D-I softball signings will get the chance to play for the Spartans on the same field where she and her teammates claimed a state title.

Harwood was a designated hitter in 2019 when the Colts beat Eastern Randolph in three games for the state title on the UNCG campus.

Last season, Harwood moved to third base for the Colts’ three wins.

She wanted to play collegiate softball. The first call to her last September was UNC-Greensboro, who set up a visit 11 days later. She met the coaches and players, including watching practice and visiting a class with a player, then watched a coaching clinic that evening.

“All the players, the coaches and everybody were so nice to me and treated me like one of their own,” Harwood said, adding she verbally committed that day even before the clinic started.

She said she has played on several college fields, but it was special to be able to win the title on the field where she has chosen to play in college.

Like her teammates, Harwood has been practicing and playing travel ball over the summer to stay ready for the upcoming season, which she said all of her teammates want to play. She wants to be able to play her senior season, enjoy the tradition of senior night and compete for another state title.