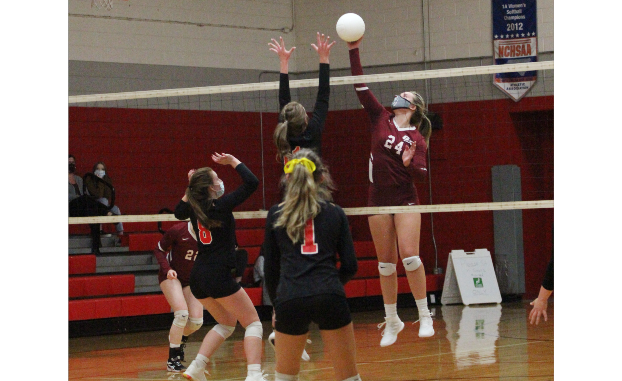 The NCHSAA saw its first regular season competition in eight months this week with the opening of volleyball and cross-country seasons.

Volleyball had the added challenge for student-athletes to compete on the court while wearing masks after the state association announced the changes Friday.

Many teams and players had experienced athletic effort with a mask already in practice and skill development sessions, but Gray Stone saw players wearing masks all the time.

Piper Mauldin, a sophomore middle hitter with the Knights, said it was awesome to be back on the court competing, adding she had been looking forward to playing.

Mauldin said playing with a mask “was definitely a challenge,” but having been practicing with them on meant playing was not as difficult as it could have been. It was “still really difficult,” she said.

Having the mask and playing involves a lot more cardio than she thought. She and her teammates had been doing a lot of cardio training while wearing masks.

Setter Olivia Eldridge, a junior, said being back playing high school sports “is the best feeling in the world,” adding the environment of being in a game affected her more than playing with a mask.

She added it was hard to hear her teammates at times, but the overall experience of playing a regular-season game with the mask did not affect how she or her team felt.

“All of us are happy to be here, masks or not,” Eldridge said.

She added her team stayed positive by doing their best.

“All of us love the game. That’s what we’re here to play. You make do with what you’ve got and do the best with it.”

Gray Stone head coach Rebecca Carter said volleyball players did not get to do as many offseason workouts or play as much travel ball after being shutdown in the summer with around a week’s worth of work put in. Some started back in September getting ready, but official practice started two weeks ago.

Carter said her team had been conditioning and practicing wearing masks, but would occasionally sit down to get a drink of water or catch their breath.

“We’ve done a lot (of conditioning) in a short period of time,” Carter said, adding all teams at this point “are at a disadvantage across the board just because a lot of kids didn’t do anything from March to when we started back.”

Communication is more difficult, the coach said, with wearing masks “especially when you’re in a rally going back and forth. They get excited or get down and can’t hear each other…I think that plays a toll on any team, especially our team. We are a very young team overall.”

Mauldin said her team’s attitude was different in the final three sets.

“We were down the first one. We really hadn’t warmed up that much and we weren’t playing that great.”

Carter said the team’s size advantage at the net helped Gray Stone in the final three sets along with playing better as a team.