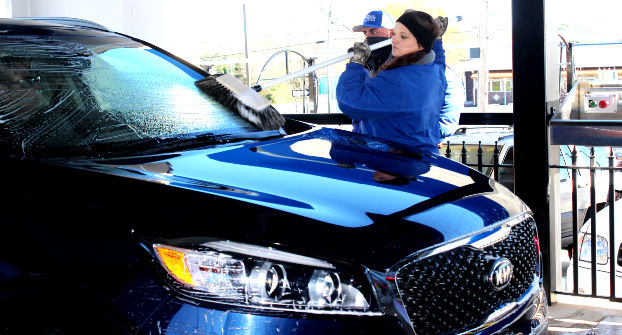 Rebecca Randall gives a car an extra scrub with the brush before it goes down its three-minute trip through the new Tidal Wave Car Wash in Albemarle. (Photo by Charles Curcio/staff)

A new business at one of the busier intersections in Albemarle looks to brighten people’s rides to leave their parking lot with a new shine on them.

Tidal Wave Car Wash, at the intersection of the N.C. Highway 24-27 Bypass, N.C. Highway 740 and Main Street, opened Wednesday and is offering free car washes from 9 a.m.-6 p.m. through Sunday. The car wash being offered is the Ceramic Sea Gloss, the most expensive of the offerings priced normally at $25 or $39.95 per month for unlimited washes.

The company, based in Thomason, Georgia, was founded in 2004 and grew out of locations in the metro Atlanta area, according to Marketing Director Jennifer Rogers. The Albemarle location brings the total to 56 across eight states. According to the 2020 Top 50 List of Conveyor Carwashes, published annually by Professional Carwashing and Detailing Magazine, Tidal Wave ranks No. 6 nationally.

Rogers added the company is different “hands down” because of its commitment to the customer.

“We really push to have that Chick-Fil-A like customer service. We welcome our customers as they come in and try to be available for questions and communicate with them,” Rogers said. “Our customer service is something that shines.”

On the third Friday of September, each of the Tidal Wave locations donates 100 percent of proceeds from sales during the day to local non-profit or charity groups in their respective areas.

Mike Goetz, who is in charge of the Albemarle location, said he is looking for groups in the area for which to be able to work with on fundraisers and other events. He added the car wash has had a lot of landscaping done around the new facility “because we want to have the best looking facility we possibly can…you know your car’s going to be taken care of because you see the place taken care of like this.”

Goetz added, ”we want to see everybody here…we want to be your best friends.”