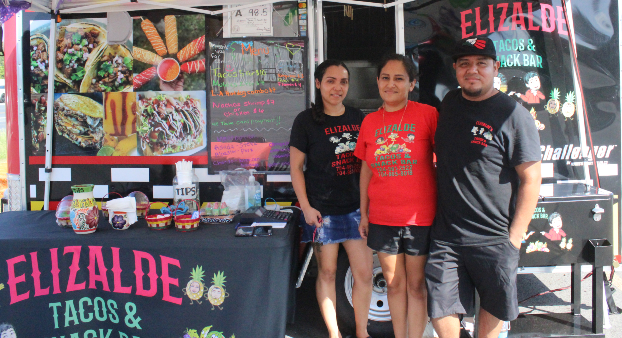 If you are hungry for authentic street tacos in Stanly and see a black-colored food with neon lettering, pull over.

Elizalde’s Tacos and Snack Bar has become one of the most popular and successful in Stanly County, garnering attention at various events like the Rebound Round-Up series recently at City Lake Park.

Jesus Guzman and Christina Elizalde own the truck selling authentic L.A.-style street tacos along with burritos and mulitas, a type of grilled quesadilla using two corn tortillas rather than flour tortillas. The truck also serves snacks, or antojitos, like taki corn, which is corn on the cob with mayo and spices. Taco lovers can also enjoy bottles of imported soda and sparkling water, while those on a keto diet can get their tacos with a shell made of cheese fried on the grill.

With cooler weather in store for Stanly, new drinks are also on the menu, including champurrado, or Mexican hot chocolate, coffee with a hint of cinnamon flavor, and arroz con leche, a type of Mexican rice pudding served hot.

The thoughts of opening the truck, Guzman said, came because Stanly did not have original Mexican food, saying one would have to drive at least 30 minutes to find such before they opened.

“We have a large community here of Mexican people and people from California,” Jesus said.

Guzman said he does not blame the local Mexican restaurants for what they serve for their customers, but the couple want to stay true to the cuisine they grew up with and learned to make from their mothers and families.

“They gave us the recipes they had for generations,” he said.

Street tacos are normally corn tortillas filled with meat, salsa and onions, while tacos served in other restaurants have different toppings like lettuce. Usually smaller, the truck’s tacos have meat marinated in special recipes which different from restaurants.

She said the tacos in restaurants are good “but the taste is not the same because I guess they just try to go (with what people want). We stay true to what it is…this is homemade. Everything is homemade.”

For the couple, their taco truck is about bringing a piece of Mexico and Southern California to the area, with tacos made of pork, steak, chicken, Mexican sausage and more marinated for at least 24 hours. The truck also features taki corn topped with ground-up Flamin’ Hot Cheetos on it.

“You will see men driving a little car (holding) ears of corn,” she said. “Nobody had tasted it before, but (customers) were amazed when they tried it.”

In operation since February, the truck grew out of the demands the family fielded for catering for parties, but with the emergence of the coronavirus, the truck was how the pair adapted to stay in business.

“Let’s try to sell tacos for the meantime, but we never thought it was going to make a big impression,” Elizalde said.

Word of mouth continued to grow for the truck along with social media posts, and the clientele for the truck includes people who have recently moved to Stanly from California. Customers also come from an hour away often to eat.

Even with the current pandemic, Elizalde said business has been steady. The truck stays open until the evening for customers wanting supper, with many diners wanting the truck to stay in one place.

When asked about opening a restaurant of their own, the couple said it’s possible but they are hesitant to do it, but they may surprise people at some point.

The menu, also, will stay simple for the couple at this point.

“We don’t want to change it to a restaurant menu…when you’re a street vendor, you don’t sell big platters. Keep it simple.”

The truck will be open Monday through Friday in the A.M. Tarlton Insurance on 1646 E. Main St. Public or private catering events will be on weekends for the truck.