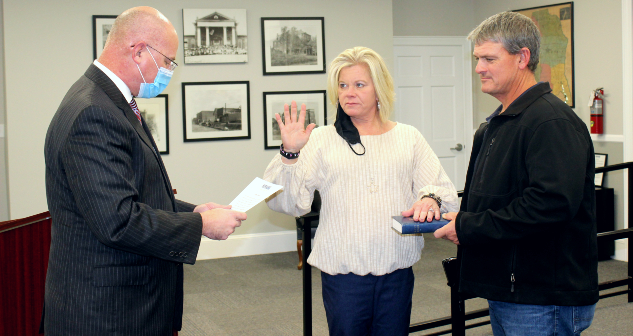 Linda Campbell is sworn in as the new mayor of Norwood at Monday's meeting by new state Court of Appeals Judge, Jeff Carpenter. With the new mayor is her husband, Chip Campbell. (Photo by Charles Curcio/staff)

The newly-elected mayor of Norwood along with the town council got directly to work at Monday’s meeting, including furthering efforts to improve the wastewater system.

Former mayor Harold Thompson made several remarks at the beginning of the meeting before the swearing in of new mayor Linda Campbell. Thompson said “a lot of big projects [are] about to start,” adding the town will have some debt from it but it is “doable.”

Thompson said the filtration project and wastewater plant upgrades means “a fairly large debt service for a town our size” and advised the incoming council to be careful with money for repayment, including reserving fund balance for it.

Campbell was then sworn into office by Jeff Carpenter, a Superior Court judge from Union County who recently won election to the state’s Court of Appeals.

Also sworn in was James Lilly, who won reelection in November; Lilly was also later named mayor pro tem, a position he had with the council in his last term.

The council approved a resolution to reduce the overall amount of the Norwood Wastewater Treatment Plant project bid, which was reduced by $512,150 by Willis Engineers. Greg Wells, who works for Willis Engineers, made a presentation to the council.

Originally, Haren Construction was awarded the contract with the low bid of $4.3 million, but that amount was greater then the funds available.

The new bid from Haren of $3.8 million will cost the town an additional $85,000, which Town Administrator Scott Howard said could be paid up front or be financed.

Councilman Robbie Cohen, participating in the meeting by phone, moved to approve the resolution, seconded by Betty Harrison. The motion passed 4-0.

The council also postponed discussions regarding filling the open seat on the town council left by the resignation of Larry McMahon until the January meeting, which will also now start at 6 p.m.