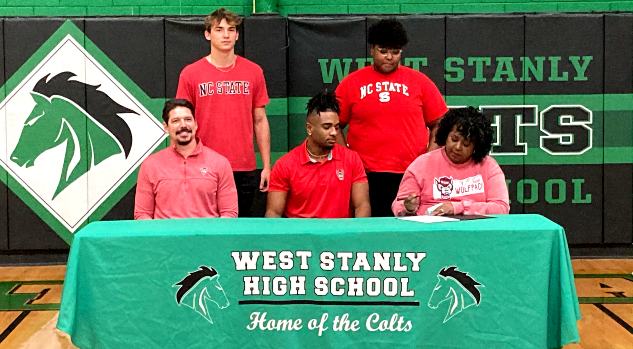 West Stanly football standout Jordan Poole had made it clear where he was going to play college football, but he made it official Wednesday.

At a ceremony inside the Colts’ gym, Poole signed his national letter of intent to attend and play football at N.C. State starting in the spring.

Poole said going to State is “a family atmosphere knowing I was going somewhere which felt comfortable, with people that walk in my same shoes.”

He added the information he had learned about the program was “straight up,” with a good coaching staff.

Playing for West Stanly was the best four years of his young life, he said, adding “I won’t forget the lessons coaches taught me that I’ll be able to use now and in the future.”

The Colts played “straight-up football” in his time under head coach Brett Morton, a former offensive line at West, saying the Colts would “line you up and run you over…an approach you can use in football and relief.”

Morton said it has been “great getting to be part of the process” of getting Poole ready for Div. I football. He said what sets Poole apart is “a really good athlete and an even better kid. He’s worked really hard in the classroom to get where he’s at…he’s going to bring a lot to State.”

Poole also credited West Stanly strength and conditioning coach Wes Herlocker for getting him prepared physically for the next level, himself a former D-I player and strength coach who also spent five seasons as a jackman for Ryan Newman’s Stewart-Hass racing team.

“Herlocker got me more than prepared for the next level…I had access to a strength and conditioning coach all four years of high school who knew what to do to prepare me for what it’s like,” Poole said.

Morton also credited Poole’s work in the weight room for his strength and on the track with his speed development.

Playing at the top level of college football was something Poole said he has wanted to do his whole life.

“Finally, being able to play on the stage that I’ve always dreamed of with my family close enough to come and watch me play…it’s a surreal feeling and I can’t wait for it,” Poole said.

Along with coaches, the Colts senior said he also credited his legal guardian, Jay Bartell, for stepping up in his life and being a father figure to him, taking him under his wing.

“He helped me get to this position,” Poole said.

With five former Stanly players having reached the National Football League, Poole said he does not want to get ahead of himself, adding he will “keep his head on straight and focus on everything I need to do now but still prepare for the future.”