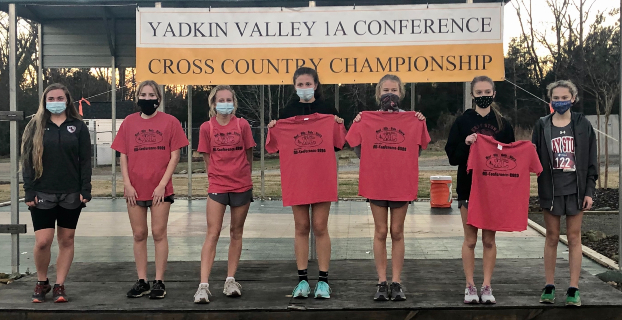 The Gray Stone women’s cross-country team, led by a freshman, earned the 2020 Yadkin Valley Conference crown at the recent meet at South Davidson.

Knights freshman Emberleigh Pauley-Brown beat her own teammate, senior Jenna Freeman, by 11 seconds to win the individual crown, finishing with a 21:01. Grace Eppenheimer, also a freshman, was third for the Knights and fourth overall in 22:52 while senior Kimbal Chapman was fourth for Gray Stone and fifth overall in 24:11. Gray Stone finished with a perfect team score of 15.

North Stanly had two finishers in the top 10, junior Lexi Goode (sixth-24:36) and senior Milena Hernandez (seventh-24:52), but did not have five finishers to qualify for the team results. Andy Billingsley finished 16th overall for North with a 26:10 while Gia Dunlap was 20th in an even 28 minutes.

The 1A Midwest Regional is scheduled for Jan. 16, with the state finals coming a week later at Redmon Park in Kernersville.