Sisters decorate the White House in time for holidays 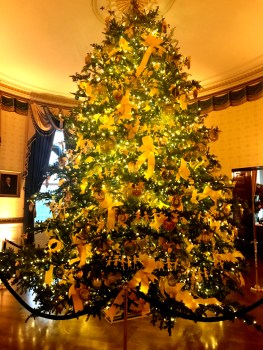 A Christmas tree in the State Dining Room of the White House. (Photo contibuted by Lisa Strickland) 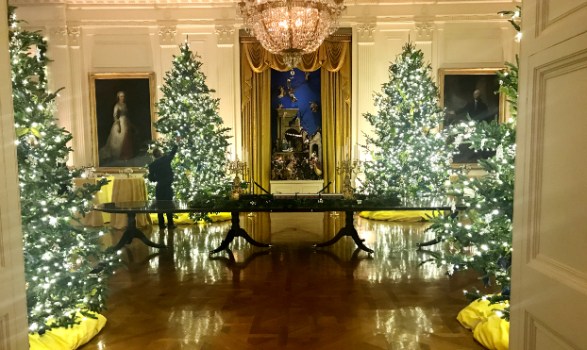 Four Christmas trees in the East Wing of the White House. (Photo contibuted by Lisa Strickland)

A White House gingerbread house on display for the Christmas holidays in the White House. (Photo contibuted by Lisa Strickland) 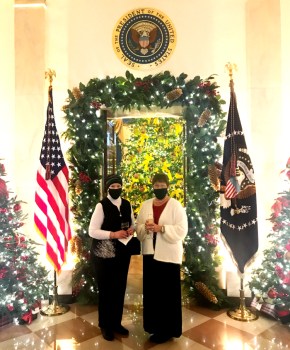 Judy (left) and Lisa Strickland standing under the Presidential Seal in the entrance of the Blue Room of the White House. (Photo contibuted by Lisa Strickland)

Christmas decorating, for many, is a beloved annual activity around one’s own home, but a pair of sisters from Stanly recently had the chance to decorate arguably the most famous house in the world.

Underwood said she saw about the opportunity to participate on a PBS program a couple of years ago but did not apply in 2019 due to the death of her mother.

Strickland, who has stage four ovarian cancer, was being taken care of by Underwood when the two decided they were both going to apply online as volunteers.

Ironically, the two found out this year on their mother’s birthday of being accepted.

Volunteers like the sisters gave up either half or all of the week of Thanksgiving to take part.

The two drove up early Thanksgiving morning and went through COVID-19 testing at the hotel, Underwood said. The pair then worked the next three days.

Underwood and others started the day at 6:30 a.m. being shuttled to the White House for breakfast at 7, then working until noon where lunch was also provided for volunteers. The shift ended around 3:30 to 4 p.m. Volunteers had the rest of the day to explore the city.

Because of her sister tiring from the work due to her health, the pair said they did not get to do a lot of sightseeing except Thursday and Sunday.

COVID restrictions in place in the White House and the District of Columbia were much stricter than those in place here, she said. Every meal, they were required to include a name and phone number for contact tracing.

“It wasn’t even an option,” Underwood said.

Teams of volunteers with names of Santa’s reindeer for identification (the sisters were team Blitzen) entered the White House and received green aprons with White House Christmas 2020 printed on them, which they got to keep.

Team Blitzen had the responsibility of five rooms in the downstairs, or ground floor of the White House: the library, china room, vermeil room, diplomatic room and map room.

The whole theme of the decorations, Underwood said, was “America the Beautiful,” with each room having its own individual theme. For example, the library decorations celebrated women’s suffrage and the 19th amendment.

She and the others made 100 pictures of various women with nosegay around the holder with holly on the tree.

Visitors to the White House were greeted by about 20 or 30 Christmas trees, she said, some of which she helped to light up.

The East Room theme was “Planes, Trains and Automobiles,” with big planes and helicopters flying from the ceiling while the Green Room was about nature.

This year’s official ornament from the White House is a picture of President John F. Kennedy. Underwood said she has one of those ornaments.

The work itself, she said, was enjoyable because she and her sister are crafty, saying the smaller group with which they worked in the library were all from the South.

“We don’t know how we got together; it was a perfect meeting,” Underwood said, adding the four became friends and shared contact information with each other.

Volunteers, White House staffers and the Secret Service personnel could not have been nicer, she added, noting how well everyone looked out for her sister.

Working in the White House was like being “in a living museum,” Underwood stated, adding she and others got the chance to see President Donald Trump arrive by helicopter.

“We watched the three helicopters circle around and watched him (walk towards us). Everybody was cheering and yelling, and he could not hear a thing. But we were all just cheering,” Underwood said.

Volunteers also were able to attend a reception on Monday night. Underwood said it was thrilling to see First Lady Melania Trump walk down the stairs to greet the volunteers.

“It’s a feeling I will never have again. It was amazing; it was very patriotic,” Underwood said.

The First Lady wished volunteers a Merry Christmas and a healthy New Year, saying she added how touched she was for volunteers to help out in the midst of the pandemic.

Underwood said she would take away great respect for the Trump, saying she would do it again but she might hesitate just to allow someone else the opportunity.

“It’s way too incredible and spectacular.”