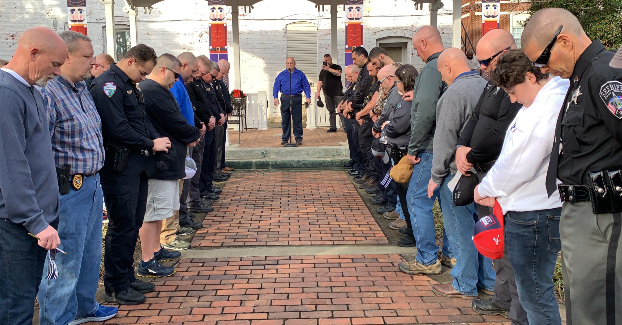 Pastor Danny Laws (middle) prays for members of Stanly's law enforcement community at Saturday's Blue Out Back The Blue event in Albemarle. (Photo by Charles Curcio/staff)

Members of Stanly County’s law enforcement community, including family members and community supporters, gathered at the square in Albemarle Saturday to Back The Blue.

A gathering of more than 125 for the Blue Out Back The Blue Stanly County listened to speakers from local law enforcement agencies, as well as Stanly County Commissioner Tommy Jordan, North Carolina Sen. Tom Ford and N.C. Rep. Wayne Sasser, expressing their appreciation for officers.

Neil Smith, a mechanic from Locust, and Melissa Torres, wife of an Albemarle police officer, co-hosted the event.

Smith said he wanted to have the event to honor officers for their efforts, adding “it would be absolutely shocking to most public people” how much danger members of law enforcement put themselves into. Citizens “would have a better understanding of how dangerous the whole job is” if they were able to see what he has seen in ride-alongs with officers.

“We don’t want our officers killed. All lives matter. (Officers) uphold the law; they put on the badge, go out and do their job,” Smith said.

Torres said the event “did my heart good to see people coming out supporting (officers) because of that fear they talked about, the fear of not knowing if (my husband) is coming back home. I know that fear. I live with it every day.”

Crisco thanked those in the audience for their support. He also spoke about the outcry for racial justice.

“I have no control over another officer or agency. I do have control over the Stanly County Sheriff’s Office, and I can promise you this. If one of my deputies, or I should say your deputies, every cross that line, they will be held accountable for their actions,” Crisco said. “We got in this profession because it’s a true calling. We do this to make our communities a safer place to raise our families.”

Whitley mentioned “the thin blue line,” asking those in attendance to wave their flags emblematic of law enforcement officers, saying cops “are on that thin line” between bad and good people.

The Locust officer also mentioned the rate of current and retired officers and veterans who die by suicide.

Smith read the script of a broadcast from the late radio broadcaster Paul Harvey entitled “Policeman,” saying it aptly describes what the life of an officer is like.

At the conclusion of the event, Laws called all law enforcement officers in attendance to bless them with a prayer for their safety to “fight the good fight for us.”