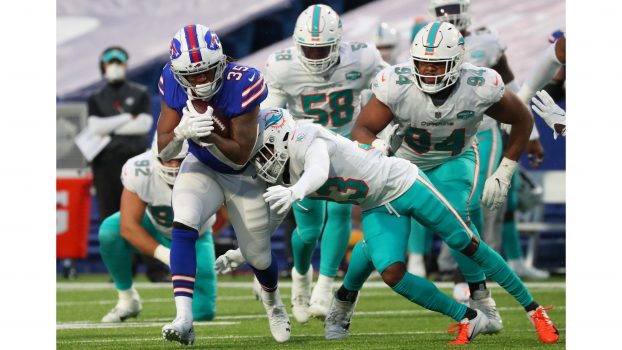 Buffalo Bills RB Antonio Williams breaks past the Miami Dolphins defense for his first career NFL touchdown in Sunday's 56-26 win over the Dolphins. (Photo courtesy of the Buffalo Bills)

Anyone watching Sunday’s Buffalo – Miami football game from the comfort of their own living rooms in Stanly having previously spent time a few years back watching North Stanly football would recognize instantly one player.

In a game of firsts for himself, former Comet running back Antonio Williams made his debut for the Bills in big fashion.

His first carry of the game early in the third quarter netted 18 yards on a day where he finished with 63 yards and two touchdowns, becoming the first undrafted Bills rookie to score twice in a game since 1970.

Having found out Friday about his chance to play, Williams said it was the next-man up mentality.

“I’ve been practicing…I think they wanted to give me a shot and I had to make the most of my opportunity.”

Williams said the opportunity was a mixture of his efforts showing his potential to the team along with Buffalo resting some players since the division title and No. 2 seed in the playoffs were both set.

“There’s always a point in the game of football, and I was told this at an early age, where the skill level is even, so you have to be able to separate yourself,” Williams said. “That’s something I was dedicated to early on. I eventually got to the level where (others) were as good as me as a football player so I wanted to outwork them.”

His first touchdown came in the first two minutes of the fourth quarter at the 13:44 mark from a one-back set. Williams took the handoff and had a big hole in the middle of the line. He turned on the speed and outraced the Dolphins’ secondary, going untouched into the end zone for his first career professional touchdown.

After scoring and pulling up before hitting the wall, he pointed up to the heavens to honor grandfather, who passed away in August and was someone Williams said never missed him play in high school.

“He came to all my games,” Williams said. “Once I got to college, his health started declining a bit, and he wasn’t able to come to the games. I was thinking about him so I pointed up. I knew he was watching.”

Two plays later, Williams retook the field with the offense after Buffalo picked off a Miami pass. With backup quarterback Matt Barkley in, Williams caught a 20-yard pass down to the Dolphins’ 5-yard line, then carried the ball on back-to-back plays, scoring from three yards out, being surrounded by the entire offensive line to celebrate with him after scoring.

Ralph Jackson, one of Williams’ coaches in high school, said his former player called him right after the game.

“I told him I don’t expect anything less than that from him. I used to always tell my guys success is preparation meets opportunity. He’s clearly been preparing for this moment. I’m happy for him, his family and the Comet football family as well,” Jackson said.

Scott Crisco, who also coached Williams at North Stanly, said he was also proud of the former Comet for his accomplishments.

“He is the perfect example of a young man that knew what he wanted and did the hard work to get there,” Crisco said. “He is the best role model for young players today. He is humble, hardworking and hasn’t forgotten where he came from. Myself and all of Comet Nation are very proud of him.”

Ranking this game as the best game he has ever had in his career, Williams said, “I’m going to continue to be the best I can for this team to get the championship that they deserve,” referring to the team and its fans.

“Understanding how important this team is to the community in Buffalo, I just want to help them get what they deserve.”