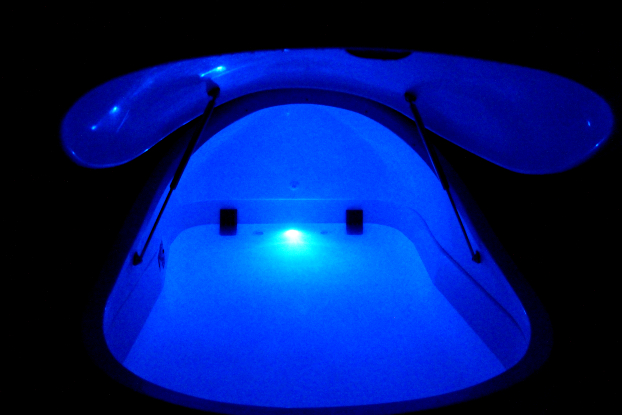 One of two floating pods available at a new spa in Albemarle, Ascension Float Theraphy and Spa. (Photo by Charles Curcio/staff)

With the hustle and bustle of the holiday season combined with the stress of COVID-19 pandemic, one new facility in Stanly offers a way to escape.

One of the main focuses of the spa, according to owner Jerry Colson, is the float center, which offers sensory deprivation therapy, or floating.

Pods like mini-pools are 200-gallon pods with just over 1,000-pounds of medical-grade Epsom salt dissolved into the water. The salt makes the water more dense, allowing people to float easily on the surface.

The pods are six feet by nine feet, with enough space for people to float inside without the walls or roof being right on top. Water in the pod is removed and filtered six times every 30 minutes; Ascension waits an hour between each appointment to allow water to filter 12 times.

“It’s really the most pristine environment you can have,” Colson said.

The owner said the dense water allows a person’s spine to decompress naturally and muscles to relax fully “that you can’t really achieve in any other environment.”

The water is kept at skin temperature so eventually a person “can’t tell where your body ends and the water begins. With all that sensory input to your brain shut off, that allows you to reach a state of rest and relaxation,” Colson said.

Soaking in the water also helps with pain reduction as the Epsom salt, pure magnesium sulfate, is absorbed through the skin and is good for muscles, joints and inflammations.

Colson said his reason for opening the spa came out of his own health issues after wanting to find more holistic alternative treatments. He discovered floating, which worked for him on both a physical and mental level.

“I was frustrated and stressed at the fact I was having issues. I walk with a limp; I have since I was a teenager,” Colson said. “It’s caused my hips to wear prematurely.”

Not wanting to take pain medication, floating was life changing because it reset his anxiety and stress he was having.

Ascension Spa also has an infrared sauna which uses a dry heat at a lower temperature than steam-based saunas to help with muscles.

The spa also has a hydromassage bed and offers a new therapy called pulsed electromagnetic field (PEMF) which is a non-invasive procedure designed to help reduce pain and inflammation along with injury recovery and wellness.

PEMF is like a transcutaneous electrical nerve stimulator (TENS) unit used in physical therapy or rehab but the device at Ascension, Colson said, takes an electrical current and turns it into a magnetic field for the entire body.

“The main angle we approach here with all these modalities is stress and anxiety reduction, because (it is) at the base of a lot of our illnesses,” Colson said. “What these things do is really just help get our body back into balance to where it can take care of itself the way it’s designed to do.”

Colson said people can take some time for themselves at the new spa.

“Time will stop for them in here.”