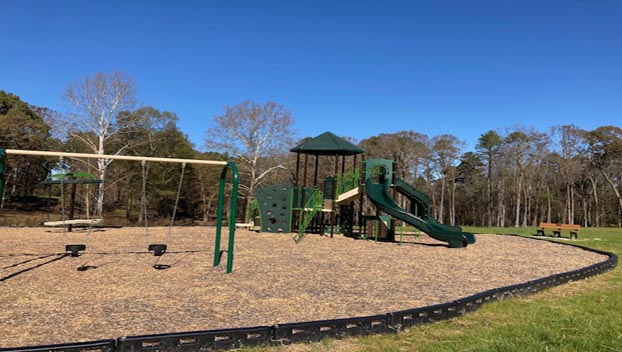 A project six to seven years in the making came to fruition recently for the New London Town Council.

A new park across from the Tarheel ChalleNGe Academy in the former home of New London Elementary opened.

New London Mayor Tate Daniels said the Jim Ivey family donated the plot of land for the park, approximately 22 acres which previously had been a mobile-home park.

A grant from the state helped pay for the park, which took two years to secure, Daniels said, along with two years of planning followed by construction for a year and a half.

The park has nearly a mile of fully-paved walking trails through the woods, three picnic shelters, a playground, restrooms, benches and enough parking for approximately 100 cars.

Some landscaping is still being completed along with fences and retention ponds which have not been taken out because of the ground being too wet from rainfall.

Bricks for a special memorial area of the park are being sold at $25 each, Daniels said, adding there is room for 800 bricks.

The park will give local residents a place to go outside and be safe, the mayor said.

During the most recent meeting of the New London Town Commission, Daniels said the town has received compliments from people who have been enjoying the park since its opening. Minutes from the meeting also indicated the Board discussed a sign for the park and possibly building a dog park.