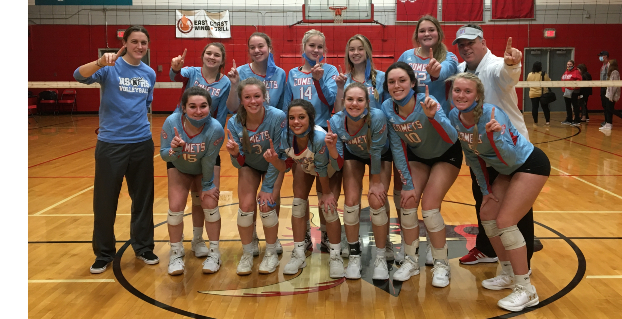 Seeing improvement is most likely one aspect of a team every coach would like to have happen. In the case of the North Stanly volleyball team, the Comets made huge improvements this season for first-year head coach Jamie Kimrey.

North went from fourth place last season after having to forfeit 11 games to undefeated this year in conference play including a 3-0 sweep Thursday night at South Stanly which secured for the Comets the Yadkin Valley Conference crown.

Another senior, Anna Hancock, led North with 19 digs while Alex Childress led the Comets with 43 assists and three service aces.

“As with the whole season during COVID, you learn to appreciate the little things,” Kimrey said.

“The girls were grateful for the chance to play. Each one knew the urgency of playing well every point.”

North’s coach added the Comets “played with an edge all season to redeem what was taken from them last year. I couldn’t be more proud of each player and the time and commitment they have put in.”

The Comets’ season will continue Tuesday in the opening round of the state playoffs. Brackets are scheduled to be released Saturday.