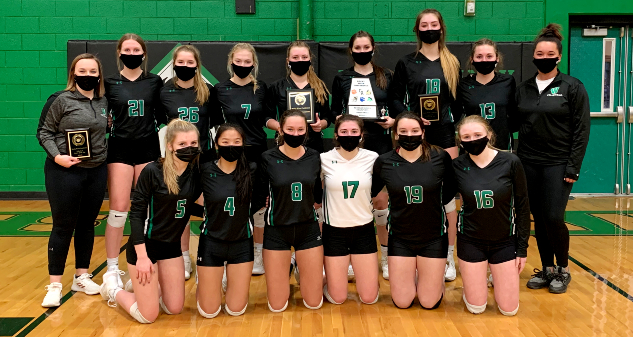 West Stanly’s volleyball team continued its dominance this season of the Rocky River Conference with a four-set home win over Mount Pleasant in the finals of the 2020-21 tournament.

The win gives the Colts a sweep of both the regular-season and tournament titles in the RRC, along with sweeping two of the individual postseason awards.

Junior middle blocker / outside hitter Kayli Cleaver, who had 26 kills, six aces and 11 digs in the win, was named the conference’s Most Valuable Player, while head coach Steffi Dutton was named the RRC Coach of the Year.

Cleaver said after West lost the first set, she and her teammates wanted the win so bad “that we just had to get together and work as a team. That’s what we have always been doing.”

The junior added sometimes the team starts rough “but we all figure it out.”

The Colts’ size at the net was a factor, with Cleaver, who is 6’3″ tall, saying at one point she looked at the front row at herself and her teammates, including senior Madison Kee, and it prompted her to think, “We look really big here.”

Much of the team has been together for three seasons, which has helped the girls to form a special connection, Cleaver said.

Included in that is the relationship between herself and senior setter Addie Barbee, when Cleaver said, “we’ve always had that hitter-setter connection, and once it starts it just carries on and really showed up (tonight).”

Addie along with Riley Barbee had 27 assists together, with Addie having 12 digs and Riley with seven.

West head coach Steffi Dutton also talked about the special connection her players have, saying, “I can look at them and say, ‘Do I need to call the timeout?’ and they can tell me, ‘No, just hold off. We can handle it.’ They have more confidence in themselves than I’ve ever seen in another team, confidence to get the job done.”

“These girls have gotten to know each other. They’ve connected on and off the court, and in travel ball. Their connection is unexplainable…they just have a deep connection and know where each other is going to be 98 percent of the time.”

Dutton also credited the team’s defense, specifically mentioning sophomore Kelsey Parker saying, “she has really stepped up. Everybody has.” In the win, Parker led West with 20 digs.

A former Albemarle libero, Dutton said she has tried to have more of an offensive mind for the team saying the team has been so focused on its defense. The team has worked hard this season in combining offense and defense, practicing it as much a possible, she added.

“Our offense and defense connected more than it has lately,” Dutton said.

Regarding the playoffs, Cleaver said “we talked about (playoffs) and we’re ready to win state this year…as long as we continue talking to each other and work as a team and know we’ve got each other’s backs, we’ll be good.”

Dutton said moving forward in the postseason, the Colts would be taking the playoffs one game at a time.

“We just (will) focus on the opponent ahead.”