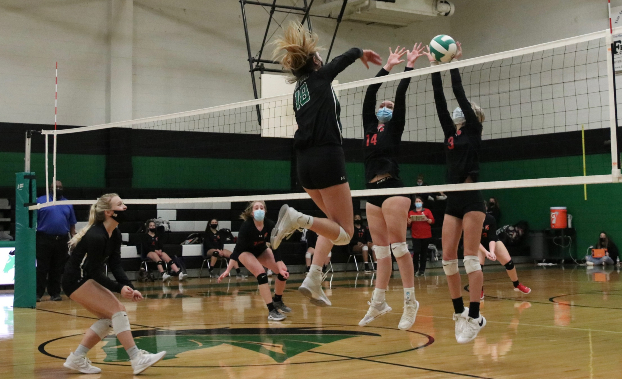 Kayli Cleaver goes for a kill in the Colts' win over Central Davidson. (Photo contributed by Jennifer Barbee)

Because of 32 teams in the postseason instead of 64, the West Stanly volleyball team took on a No. 15 seeded Central Davidson Spartans team in what was more akin to a second-round matchup than a first-round.

West maintained a small lead through the first part of the opening set and built a 20-10 lead, forcing a Spartans timeout. Cleaver ended the first set with two kills on the final three points.

The Spartans responded in the second set taking a 7-4 lead, forcing the Colts to call timeout. West rallied behind the serving of Caylee Clayton to retake the lead with Central calling for timeout trailing, 10-8.

Central Davidson recovered and led 16-13 but West again answered. Back-to-back aces from Riley Barbee put West up, 17-16 amid a 7-0 Colts run. The Spartans pulled into a 20-20 tie late in the set and outscored West 5-2 the rest of the way to even the match, ending the set with a kill from the middle.

The Spartans jumped out to a fast 9-2 early lead before West rallied to tie the match twice, at 14 and 16 points. However, Central pressed the attack and outscored the Colts 9-4 the rest of the set.

Both teams stayed close to each other in the fourth set with a Cleaver kill giving West an 11-10 advantage. The Colts battled back to 18-14 lead but the Spartans fought back to tie the set, 20-20, forcing a Colts timeout. West forced extra points then got a kill from Kee and a service ace from Clayton to force a fifth and deciding set.

In the final set, neither team led by more than two points until West went up 11 just after a Spartans timeout. Central scored three points in a row to tie it at 11 then got blocks at the net on three of the next four points, all for the Colts, to seal the win.

The match for West was “100 percent like a second or third-round match…you’re playing the top teams from every conference,” according to West head coach Steffi Dutton.

Central Davidson took advantage of their size at the net, Dutton added, making it hard to make adjustments.

“However, I told the girls we can’t worry about our mistakes…it showed in the fourth and fifth sets. We did what we needed to do. ”

Dutton said she shared some wisdom she learned from her father about errors with the team.

“He said, ‘Why are you worried about a play if you shank (the ball)? You can’t change it. Just focus on the next play.’ After drilling that into this team the last three or four years, they fully understand it,” Dutton said.

After topping the third-place team in the Central Carolina Conference tonight, Central Davidson, the Colts will host the CCC champions, seventh-seeded South Rowan, Thursday night at 7 p.m. The Raiders swept No. 10 South Point in three sets in the first round.