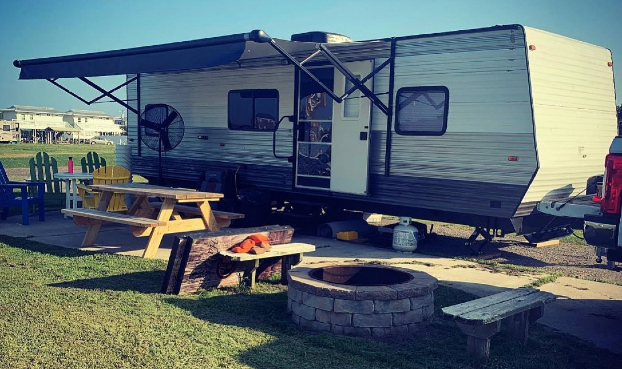 Karen Jaramillo posted this picture of the trailer which was stolen from she and her husband on Facebook. (Contributed)

One local resident took to social media this week after having a 30-foot camper stolen from their property last weekend.

Dr. Karen Jaramillo, and her husband, Josh Ferguson, went to social media asking for help for the recovery of the camper taken off their property just outside Oakboro’s jurisdiction on N.C. Highway 205.

Her original post about the theft had as of Wednesday evening been shared more than 1,100 times on Facebook.

While both live in Albemarle, where she works in a clinic at Atrium Stanly, Jaramillo said the trailer sat on 18 acres of land south of Oakboro on the way to Monroe.

Jaramillo said she and her husband have been camping for the last six to eight months and not many people would have known about them having the trailer.

Upon finding out of the theft, Jaramillo said she was distraught, adding “I was so hurt that somebody would have plotted to do this to us. Josh and I are by no means wealthy, but we do help people… We don’t think twice about helping anybody in our community.”

She said they “had dedicated a long time to finding the perfect camper for us to travel with our friends and family…they literally took our home. It was a second home to us…I have been violated.”

The couple also had a number of personal items in the camper which were also stolen.

Stanly County Sheriff Jeff Crisco said detectives from his office were out until late Tuesday night investigating the area, adding the investigation is ongoing.