West Stanly volleyball falls in 2A quarterfinals to West Wilkes 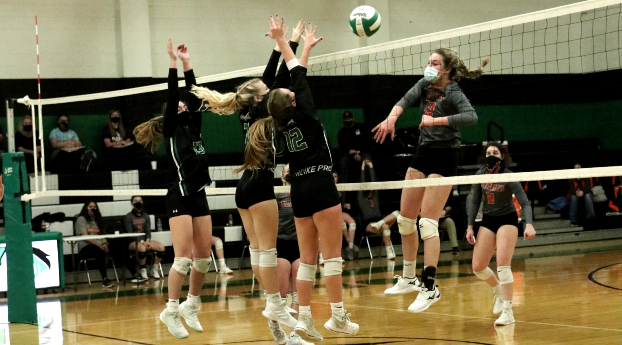 West Stanly’s volleyball program had never reached the third round of the state playoffs until Saturday’s home matchup as the second-seeded Colts hosted No. 3 West Wilkes.

In a battle between two undefeated squads, West Wilkes advanced to the 2A semifinals with a three-set win over West Stanly with scores of 25-18, 26-24 and 25-15.

Regarding the match, Colts head coach Steffi Dutton said she was not mad or disappointed.

“That was the best we have blocked all season,” she said. “I couldn’t have asked for anything more, the hustle. They never gave up on a play.”

The Blackhawks (17-0) came out firing in the first set, building a 13-4 lead early and leading by as many as 12 points to take the opening set.

West Stanly (13-1) led 20-14 in the second, but West Wilkes kept the frame close with three points in a row. The teams battled into extra points where the Blackhawks’ libero got a dig on the last point which the Colts could not return.

West Wilkes jumped out to another early lead in the final set, forcing a Colts timeout winning eight of the first 10 points. The Blackhawks went on to take the third set by 10 points, moving on to the Western Regional Finals, where the Blackhawks will host No. 8 Foard.

The Colts graduate three seniors from this team which won 68 games together all playing on varsity for four seasons: Addie Barbee, Riley Barbee and Madison Kee.

West Stanly’s three seniors meant a lot to the team, Dutton said. All three started stepping up when they were freshman and she was an assistant coach.

“You can’t play like you did in middle school,” she told the players, adding “you have got to learn step up and be the leaders because you will be leaders when you are seniors…show everyone coming through what this program is going to be about. They mean the world to me.”

Dutton said the success this season “set the tone for everybody else coming up.”