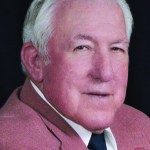 He was one of the last two officials with a long-standing stretch of service in the town. Floyd Wilson, Mary Ann Fisher, Terry Almond and Barbee are all gone now.

Mayor Terry Deese, who has served the town for 23 years, and Town Administrator Carolyn Capps are the last links to that core.

Deese was Barbee’s nephew and helped care for he and his wife, Carrie, the last few years.

“He never asked for publicity. He was an honorable person,” Deese said. “Several of his friends were on the town council.

“I just think he enjoyed some of that and he enjoyed helping people,” said Deese, adding that Barbee presided over town utilities when Richfield was added its sewer system.

Deese considered Barbee and his wife like “another set of parents.”

Deese remembers fondly the times Barbee, who had served as president of the Stanly County Saddle Club, would take him to the mountains to go horseback riding.

“He had two of the most beautiful horses you’d ever seen, Prince and Rocky,” Deese said. “Those were probably some of the best times I ever had.”

As for the cause of death, Deese says Barbee was basically heartbroken following the death of his wife last year.

Deese said Barbee told him in his final hours, “You don’t know what it’s like when you lose someone you’ve loved for 65 years.”