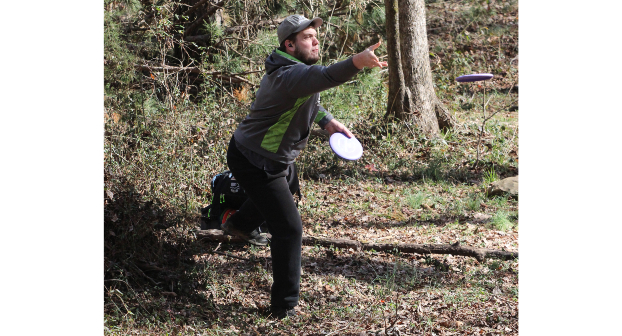 One sports tradition which continued in Stanly Saturday was the annual disc golf tournament on the Fox Chase Course at Chuck Morehead Park in Albemarle.

An annual charity event, this year’s Ice Bowl raised $1,031.54 and 542 pounds of food, both of which were donated to Stanly Community Christian Ministry.

Of the record 89 players taking part in seven age and skill categories, tournament director Bryon Carter said approximately 80 were from outside the county lines.

“It was personally my first event and the first for a lot of players. The Ice Bowl series, along with us running it as a PDGA sanctioned event, is a great way to introduce people to the next level of competitive play without the ‘normal’ stress,” Carter said.

“I have run the last seven or so events and we just love giving back to the disc golf community.”

The reason the event has been so successful, he said, is that disc golfers just love to play disc golf.

“Disc golfers understand it takes sacrifice and unique ways to gain attention for our sport. I’ve found that most disc golfers are kind souls that really want to help the charity and support other clubs. We run great tournaments on great courses,” Carter said.

In the professional open division, Ryan Kenney, a Stanly native who lives in Concord, finished with a two-round score of -19, six strokes better than the second-place finisher, Winston-Salem’s Brandon Robertson. He also set the course record for lowest round with a -13 round of 43.

John Hornburger of Waxhaw won the Amateur Masters (AM) 40+ division with a +3, while Brian Spencer of Raleigh earned first-place finishing at even par in the AM 50+ division. Phillip Watson, also of Raleigh, won the 60+ division crown shooting +2.

Ted Mosher IV of Indian Land, South Carolina, won the intermediate division out of 23 players by one stroke, finishing at -1 for the day.

Ryan Rhodes of Concord and Brent Thompson from Troy tied for first in the recreational division and Owen Rice of Holly Springs won the Junior under 18 division finishing at +6.