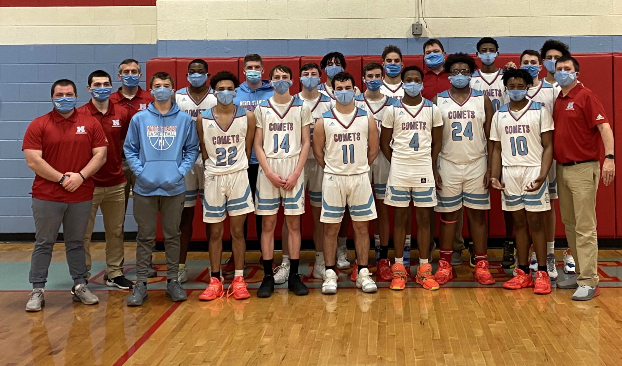 Hosting South Stanly, the Comets celebrated Senior Night with an 83-62 win over the Bulls which secured the Yadkin Valley Conference championship.

Doug Smith had a career-high 21 points for the Comets (8-2, 8-0 YVC), adding 13 rebounds, while Dyson Bell added 17 points, including 12 in the first quarter in which North outscored South 34-16, and a team-high eight blocked shots. Stefan Harris added 10 points for the Comets.

North Head Coach George Walker talked about winning the title in his first season with the Comets, the team’s first YVC title since the 2017-18 season.

“It’s big to win the conference in my first year. We set out at the beginning of the season with that being a goal. (I am) super proud of the kids for accomplishing our first goal,” Walker said.

North has three non-conference games coming up before the NCHSAA 1A state playoffs start, for which the Comets have earned the YVC’s top seed in it. Walker talked about the Comets’ approach heading into the final regular-season games and the playoffs.

“(The playoffs) are two weeks away and we have to come in every day with the mindset that we lost the last game and have to get better.”