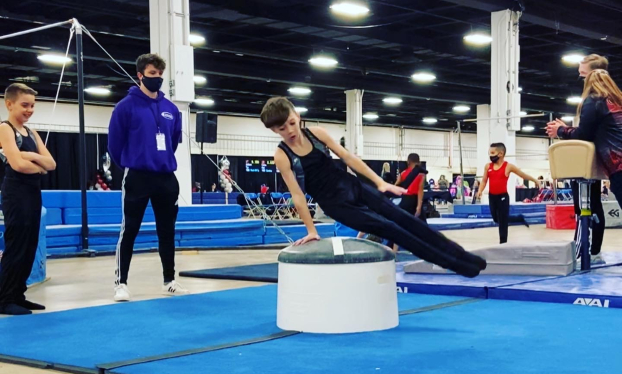 Miciah Barringer does a routine on the mushroom during the Rocky Mount meet. (Contributed)

Carson Denney (Level 4, Division 2) finished first on parallel bars, floor and pommel horse, taking first in the all-around with a 52.2.

Miciah Barringer (Level 4, Division 2) placed third in the all-around and won first on rings and high bar with a 9.2.

Levi Singleton (Level 5, Division 2) placed third in the all-around and second on high bar and vault with an 8.9.

Luke McKibben (Level 5, Division 2) won first on vault, parallel bars, high bar, floor, pommel horse, and all around with a 46.0.

Rhys Brace came in third on rings, vault, and high bar as well as second place on parallel bars with an 8.0.

Russ Carpenter was first place on vault, high bar and pommel horse, and took first in the all-around with a 47.3

The Level 5 Boys team came in first place in their division.