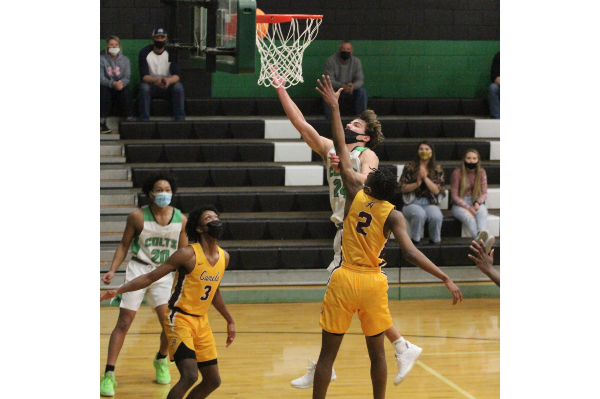 West Stanly's Jake Bartell drives to the basket and scores in the first half of Tuesday's home playoff game. (Photo by Charles Curcio/staff)

For three quarters of Tuesday’s first-round 2A men’s basketball playoff game, the host West Stanly Colts and visiting Atkins Camels played an even match up with neither team leading by more than a few points.

In the fourth quarter, the Camels’ shots started to fall and the visitors pulled ahead en route to a 68-53 win over the Colts to advance in the playoffs.

Jake Bartell led West (11-2) with 16 points, while Austin Medlin was limited to a season-low of nine points and only two in the second half. Tayshaun Haygood scored eight for the Colts.

Jalante Edwards led four in double figures for the Camels (13-1) with 16 points. Michael Conrad added 15, all in the second half. Arun Somasundaram and Yusef Suggs Jr. added 10 each.

West played the second half with one important starter, forward Trevor Kelly, playing with a lower leg injury suffered in the waning seconds of the first half. Kelly was backing up on defense and inadvertently collided with a teammate, Caleb Ferree.

Late in the third quarter, Medlin scored on a layup, his final points of the game, to put West up 41-39. It would be the last lead of the game for the Colts.

A 12-2 Atkins run in the fourth helped the visitors build a double-digit lead. Atkins outscored West 22-10 in the last period to win and advance to play No. 1 seed Hendersonville Thursday.

“We got a little bit tired…(Atkins) hit a couple of shots they had not hit earlier. They were too good when we had to chase them (defensively); when we played our regular defense, we were right there with them,” Thompson said.

The West head coach added Bartell had been “a warrior” for the team all season.

“He is one of the absolutely toughest players I’ve ever coached.”

West finished the season as co-champions in the Rocky River Conference for just the fourth time in school history and first time since 2002, which Thompson said was a goal coming into the season.

“The thing I’ll take away the most from the season is how these guys played for each other. I’ve never coached a team this close from top to bottom,” Thompson said, noting five of the team’s seniors played together for many years. “They were quality kids who could play.”

Graduating this season for West are Medlin (who unofficially finished with 1,455 career points at West), Bartell, Ferree, Kelly, Jordan Manshack and Dominic Redmon.