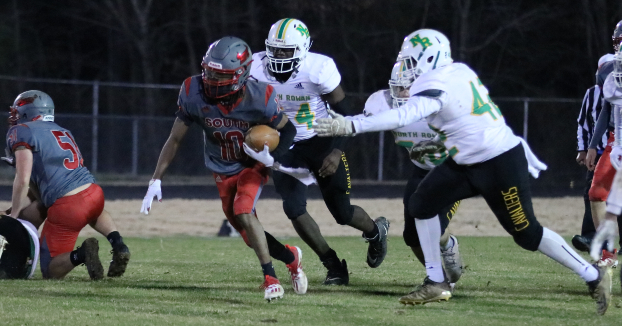 Friday night’s home game for the South Stanly football team started well for the hosts, but turnovers and mistakes helped North Rowan rally for a 44-18 win.

North Rowan running back Zay Davis had a big night for the Cavaliers (2-0, 2-0) with 156 net yards on 17 carries, averaging 9.2 yards per carry, with three touchdowns. Quarterback Kyree Sims added two rushing scores and threw for two touchdowns as well.

South Stanly’s aggressive tactics on fourth down in head coach Ryan Ochier’s time with the Bulls paid off early in Friday’s game. A penalty on a fake punt attempt put South at the Cavs’ 42-yard line on fourth and 2. Deciding to go for it, Smith took the handoff on a misdirection play and scampered 44 yards down the field for a touchdown and an early 6-0 lead.

North Rowan scored three touchdowns in a row to build an 18-6 lead in the second quarter, but South responded. The Bulls cut into the Cavaliers’ lead midway through the second, finishing a six-play, 47-yard drive with Kluttz hauling in a 12-yard touchdown pass from Gaddy. The Bulls again were within six points, 18-12.

A turnover and a bad punt snap in the final four minutes of the first half set up two more touchdowns for North Rowan as the Cavs led at halftime 32-12.

South Stanly kept the game within two possessions in the third quarter, stopping several drives including an interception of Kyree Sims by South’s Quavi Caraway. A seven-play, 51-yard drive, capped by Smith’s second touchdown run of the game, pulled the Bulls within 14 points, 32-18.

The Cavaliers immediately answered on the next drive, converting a fourth and 14 at the South 24 with Davis scoring one play later. North Rowan scored early in the fourth quarter and held the ball for nine of the final 12 minutes en route to the win.