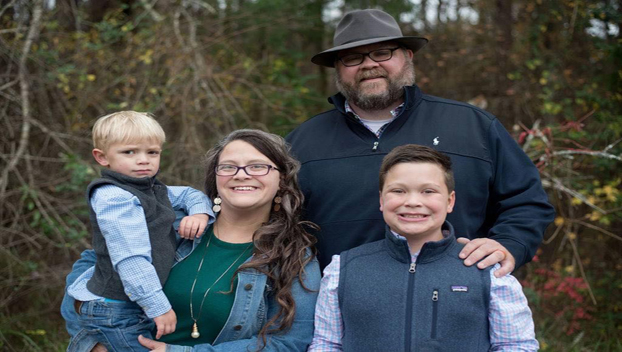 Jennifer and Beau Linker are joined by their sons, Bryson, left, and Jackson. Beau was recently named to a Fellowship of Christian Athletes post.

One local minister recently added to his duties pastoring two churches by taking an administrative position with Fellowship of Christian Athletes (FCA).

Beau Linker, pastor of Oak Grove and Badin United Methodist churches, is the area director of FCA for Stanly and Montgomery counties.

FCA first came onto the scene in 1954 as a non-profit organization based in Kansas City to be a Christian-based sports ministry in schools.

Last fall, with the COVID-19 pandemic closing many schools, club activities like FCA were shut down.

“(FCA) has been kind of neglected, so we’re trying to get the program back up and running in the area,” Linker said.

Linker mentioned the efforts of former North Stanly quarterback Noah Crisco, son of the Comets’ head coach, who is an FCA ambassador in the area. The pastor said Crisco is trying to get huddles, or Bible study groups, off the ground in the area using online meeting apps like Zoom.

Having a background in youth ministry, Linker said he missed working with kids in recent times in elder churches, saying the new position with FCA was “an opportunity to be able to get to know folks where they are in the community. We have so many churches, but a lot of time folks won’t step foot in a church so (FCA) can meet some of these kids.”

So far, FCA clubs have been established at North Stanly and West Stanly high schools, but Linker said efforts are underway to expand to Albemarle and South Stanly.

Linker is in the fundraising stage as well for FCA, saying he is raising funds for Bibles and other resources for the new FCA branches.

For example, Red Cross Baptist Church in Locust opened its doors to West Stanly students, while North students were meeting at Skate City on U.S. Highway 52.

Getting places to allow FCA meetings to happen will be important going forward, Linker said, “with so many of the schools not doing their after-school activities.”

Growing up, Linker said his church was not big enough to have a youth group, so FCA’s club at Concord High School served as a church youth group.

“The biggest thing is bringing the Gospel to kids that otherwise would not hear it; that we are very passionate about,” Linker said.

Those wanting to support the FCA group may visit my.fca.org/beaulinker or mail checks to FCA, 29386 Nelson Mountain Road, Albemarle, NC, 28001.

“No gift is too big or too small.”