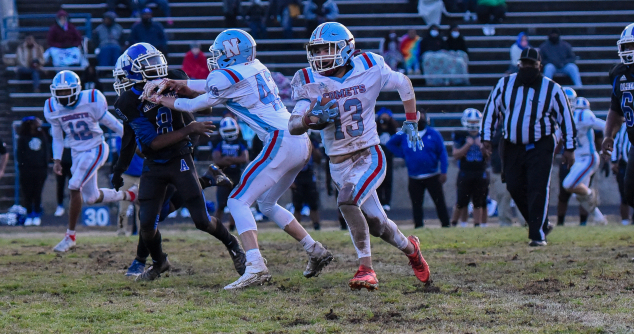 Cooper Hogan (No. 13) gets a block from Clay Hatley (No. 43) as he moves upfield during Friday's road win for North Stanly versus Albemarle. (Photo contributed by Dawn Lucas)

The lifetime football series between Albemarle and North Stanly has been one of long win streaks.

The current streak is seven in a row for North Stanly, including Friday’s 43-7 win at Albemarle.

Quarterback Luke Shaver had a big night for the Comets (3-0, 2-0 YVC), throwing for 184 yards to eight receivers. Stefan Harris hauled in three catches for 71 yards and two touchdowns.

Albemarle (0-2, 0-2) struggled offensively in the game, fumbling the ball seven times including some bad snaps which continually pushed the ‘Dogs backwards. The Bulldogs finished with -3 net total yards on offense.

Both teams also struggled with penalties. Albemarle was flagged 14 times for 127 yards, while North had 12 penalties for 115 yards.

But it was a dramatic catch by senior Cooper Hogan which turned the game in the third quarter.

North led through the first half 14-0, but a 53-yard touchdown run from Albemarle’s Jaylen Pinckney cut the Comets’ lead in half midway through the third.

On third and 12 from the Albemarle 23, a bad snap went over the head of Shaver. The junior QB calmly picked up the ball and scrambled to his left.

In previous games, Shaver said he would have tucked the ball under his arm and ran. This week in practice, though, the quarterback said he had been working on looking downfield when scrambling.

“When I ran out (of the pocket), I saw Cooper throw his hand up. I knew he was wide open,” Shaver said.

While being tackled, Shaver found Hogan for a diving catch on the sideline for a first down.

“I saw (Shaver) rolling out of the pocket and he looked me in the eyes. I was like, ‘Are you going to throw it?’ He slung it,” Hogan said.

The play fired up the Comets, who scored on the next play with Barber’s three-yard TD run.

North added a safety and a passing touchdown over the next minute to lead 29-7 and added two fourth quarter touchdowns, scoring 29 unanswered points over the final 15 minutes of the game.

“As soon as that play happened, we just kept on rolling,” Shaver said.

North’s acting head coach Chris Maidene filled in for Scott Crisco, who was not at the game for personal reasons. Maidene said the Comets had planned to open up the offense more. Muddy field conditions changed the team’s approach, he said.

“The guys put in a lot of work this week and were really focused on this game,” Maidene said.

Regarding the win, Hogan said, “I’m just blessed to be out here. It’s an opportunity to be on the field and I’m going to take it. It’s a good win against our rival.”

North Stanly travels to North Rowan (3-1, 3-0 YVC) Friday night in a game which could go a long way to deciding the Yadkin Valley Conference championship. The Cavaliers won at Chatham Central Friday night 56-8.

“We’ve got to have amnesia…I told (the players) to enjoy it tomorrow and forget it Sunday because we have to go win a conference championship next week. We’re going to put that work in,” Maidene said.