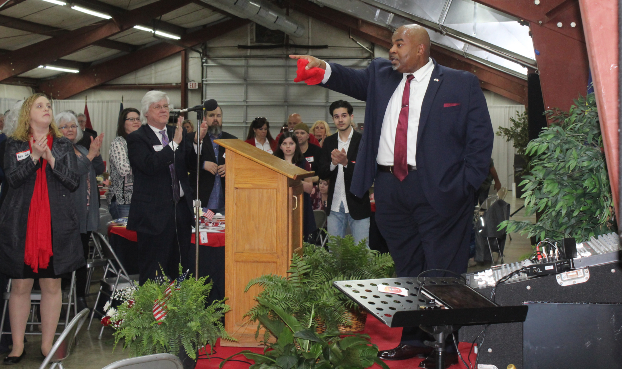 Members of the state legislature were in attendance, along with Commissioner of Labor Josh Dobson, who toured the new site for Charlotte Pipe and Foundry in Oakboro earlier in the day.

Several times during Robinson’s speech, attendees applauded and vocalized their agreement with his remarks.

Robinson opened by speaking about his faith in God, saying he and his family had been listening to a gospel song one day. The first line of the song said, “Early in the morning, it smells like freedom.”

“When I’m hearing that song, I can hear our flag singing that song because God has been good for this country, which enrages me about people that want to drag this country down into the muck and the mire,” Robinson said.

Robinson said he believes the conflicts in American are not about Democrat versus Republican or liberal versus conservative, but about people “who love God and love right, and people who love the devil and love wrong. It’s about good versus evil.”

Saying the wicked are active in the news media, Robinson mentioned Raleigh TV station WRAL, saying he does not fear it.

The Greensboro native said he firmly believed Jesus was on the battlefield with American soldiers in the Revolutionary War.

“Why was he on that battlefield? Because, for the first time in human history, men acknowledged where their freedom comes from,” Robinson said.

Robinson said the enemies of America in past wars, such as the British in the Revolutionary War or Japan and Germany in World War II, did not understand “the spiritual forces that were at work.”

“There’re some folks in Raleigh, in Washington, D.C., whom we’re going to have to teach a lesson about what free man will do to hold on to their freedom.”

The lieutenant governor said he was told once that if people were good, economic systems like socialism or communism would work.

“I just wanted to gently remind you if people were good, they wouldn’t need governments,” Robinson said.

In his speech, Robinson expressed ideas about fighting socialists and extremists. He shared the example of former cult leader Jim Jones, whom Robinson said was “an avowed socialist” who became an extremist.

“The folks we’re seeing right now in D.C., in Raleigh, they’re making these egregious laws and pushing all these crazy things we’re seeing in society. Those folks are the extremists.”

Robinson said being an extremist is not about what you say, think or write, but what you do. He asked the attendees if he was an extremist for things like getting “misty-eyed when seeing this flag,” referring to an American flag behind him.

He also asked if he was extreme because he was married to a woman for 30 years, adding marriage “is between one man and one woman.”

“You can find a way under it, over it, around it or you can knock it down if you need because you are an American, not an African-American…I served in the United States Army,” Robinson said. “I served this flag and I’m a member of this nation. I’m not an African, nor are my children, and they will tell you that.”

Robinson said extremists “are on the other side and the proof is in the pudding.” Referring to transgender people, he said he does not have anything against someone who is saying “that’s your business.”

However, he added, “you’re not coming down to a fifth-grade class telling my children about your problem…(They say), ‘Keep your politics out of my bedroom.’ Well, keep your bedroom out of my classroom,” Robinson said.

“They want you to sit in silence and not say a word while boys run against girls on the track team and play against them on the basketball team…not gonna happen.”

He added extremism is “trying to be a man on the girls’ track team, stealing the dreams of these young women who have worked for so many years to achieve at the highest levels, only to have it stolen away from them by someone who does not have the right to be there.”

Robinson also addressed extremism in reference to the attacks on the Capitol in January as opposed to the unrest last year in Raleigh. He mentioned billboards put up by the state attorney general Josh Stein, about trying to identify North Carolinians involved in the Capitol incident.

Robinson said he wants to ask Stein about monitoring speech of high school students outside the classroom and cyberbullying.

“There’re already ways you could fight against cyberbullying through police departments and municipalities. We don’t need the federal government to tell us what we can say when we’re standing on our own two feet as free Americans.”

Saying people in other countries throughout history were jailed for speaking out, Robinson called the United States “the last domino standing…there’s not a single solitary place in the world where people can go to be free anymore except right here.”

Extremism, the lieutenant governor said, was trying to identify “the gender of a plastic potato,” referring to Mr. Potato Head, along with popular music from artists such as Cardi B. He also said he would not stand for any teachers union regarding discussions with children on what gender with which they identify.

“The more we push God out of the arena, the more the devil is going to step in,” Robinson said.

He challenged Republicans, whom he called “salt of the earth,” to not be ashamed of the party.

“Every good and decent thing that has ever been fought for in this nation has been done because Republicans championed it,” Robinson said.

“Stand up and be unafraid. That’s how we got here (because) for far too long we tried just to get along.”