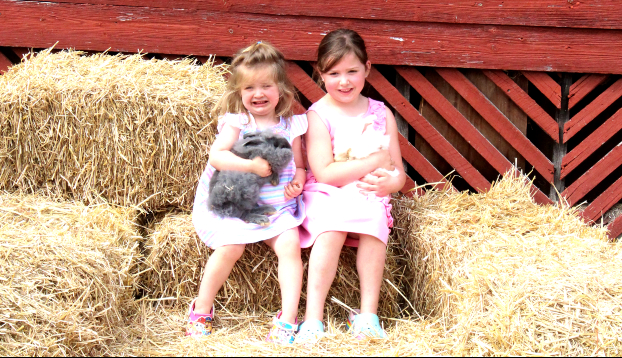 Campbell and Emerson Mooney have their picture taken with real rabbits at Saturday's Easter Egg Drop event in Oakboro. (Photo by Charles Curcio/staff)

With more facilities opening up for events, one Oakboro location saw a free event gather at least 1,200 attendees, many with Easter baskets in hand.

Jungle Aviation And Air Support (JAARS) dropped 4,000 eggs from a helicopter into a field. JAARS works to get the Bible translated into different languages in hard-to-reach areas.

Hundreds of children accompanied by parents and guardians raced onto the field for the egg hunt.

There were also games for kids to win candy and other prizes, along with photo opportunities with an Easter Bunny mascot and two real bunnies.

Everything in the event was donated, according to Alexandrea Hatley, broker in charge and owner of Divine Real Estate Boutique, which hosted the event.

The Oakboro real estate company, having opened a year ago this month, said it took a leap of faith to open its business during the pandemic. However, the business on Main Street has grown to have eight staff members including a full-time assistant.

“It was truly the biggest blessing I think that has ever happened to me,” Hatley said on opening the business.

She added her firm is built on relationships and being friends with clients, focusing less on sales and more on having a rapport with customers. A portion of all sales at the company go back into community investments, Hatley said.

“That’s just my personality. I would rather have a friendship and a lasting relationship than someone I deal with for 30 days and never see again,” Hatley said.

A mother to five boys in a blended family, Hatley said the event came out of trying to do something for them and other kids. At the time plans started for the event, most entertainment businesses centered on kids were not open or were at small capacities.

“For a lot of families, they have to commute so far before they can do anything. It was a way to give back to the community…it was a way to support businesses,” Hatley said.

With traffic being blocked around the park entrance in both directions on N.C. Highway 742 for a long way, Hatley said the turnout was way more than they had expected.

Planning for about 500, Hatley said they stopped counting heads at around 1,200, with more still arriving.

Hatley said she was grateful for everyone who attended.

“I wish I could stop (people) at the end of the road and give everybody a hug,” Hatley said.

The company is planning to make Saturday’s Easter Egg Drop a regular event.