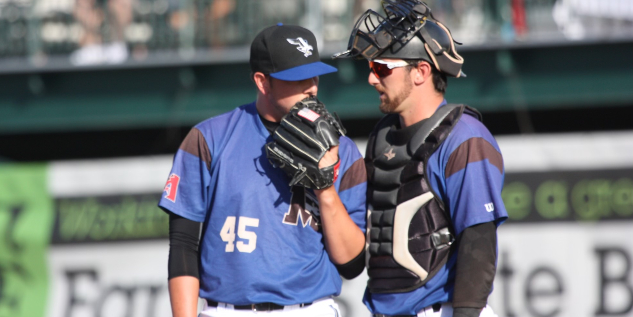 Zac Almond (right) confers on the mound with teammate Jacob Stevens during the 2018 season. (Contributed)

When the COVID-19 pandemic pulled the plug on many vocations last year, one group which also lost work were many minor league baseball players.

Many were released by their teams, but one Stanly baseball pro will get a second chance to play in the same town in which he had his best season as a pro.

Zac Almond, the North Stanly standout who played college baseball at Catawba and was drafted by the Arizona Diamondbacks, was recently traded to the new Missoula PaddleHeads.

Like many players last season, Almond was released from the Arizona farm system when the minor league season was shut down because of the pandemic.

Minor League Baseball has contracted many leagues this season, including the Pioneer League, which has gone from an advanced rookie league to an independent league affiliated with Major League Baseball.

Almond played for the Missoula Ospreys in 2018, where he had his best season at the plate. The catcher hit .345 for the season with 13 home runs and 53 RBIs. He also hit .404 in the last month of the season (August) and was named the D-Backs’ Minor League Player of the Month. Almond was named to the Pioneer League All-Star Team and started the All-Star Game as a designated hitter.

In a recent press release, PaddleHeads’ Vice President Matt Ellis talked about acquiring Almond from the Fargo-Moorehead Red Hawks. It was the new team’s first trade.

“Acquiring Zac is such a key move for us as we begin this new era of PaddleHeads baseball,” Ellis said. “He will be a leader for our team on and off the field. His 2018 season was one of the best in Osprey history. What a great addition to our team. Our manager, Michael Schlact, made his first player move a big one. We can’t wait to welcome Zac back to Missoula in May for the start of the season.”

“Everybody in Missoula loved me, I guess,” Almond said. “The people I worked with up there were really good people.”

There are many players like himself, he added, who were cut because of COVID but can still play.

He got the news while at the gym after not hearing back from the RedHawks club about travel arrangements for the upcoming season. The RedHawks play in the American Association of Professional Baseball, another independent league affiliated with MLB.

Almond finally heard from the Fargo team that Missoula “really went out of their way to try to get me.”

The former Comet said he wants to get back eventually to affiliate baseball, but he was advised he would get more at-bats and a chance to play with the PaddleHeads.

Almond said he had experienced every type of movement a player can make, being drafted, promoted, released and traded, without ever having been demoted.

Missoula, which is 2,362 miles from Albemarle, “is a great place to play ball and a nice little town for fly fishing,” according to Almond.

Players at Ogden Park in Missoula have to walk past fans up the hill to the clubhouse. Almond said he would walk up the hill and give autographs, fist bumps or whatever the fans wanted.

“Even if I had a bad day, I did my best to try to make somebody else’s day,” Almond said.

After being released, Almond came home and started giving private hitting lessons to younger players. He said seeing kids’ skills improve was satisfying, but it was also nice to see the kids’ interest in the game rise.

The advice he gives kids about forgetting bad outings and concentrating on the next pitch is what he has used in his career.

“I’ve been through the ups and downs, the highs and lows my whole career,” Almond said.

Missoula is giving him a second chance to play the game he loves, which Almond said made him emotional because of a recent loss. His grandfather, former Richfield Town Councilman Terry Almond, passed away last year.

When his grandfather died, Almond was in Texas playing with the Eastern Reyes del Tigre squad in the Constellation Energy League.

“The last conversation I had with my grandfather was about baseball…he kind of got on me a little, a ‘You need to do better than what you’re doing’ kind of thing,” Almond said.

He considered hanging up his cleats for good as a player after his grandfather passed.

However, when he found out about the trade, he told his grandmother, who said she believed his Paw Paw had something to do with his career not being over yet.

“I think he told the good Lord that he wanted his grandson to go back to Montana because he loved that place,” Almond said. The two went fly fishing when his grandparents visited back in 2018.

“I think it was the good Lord telling me, ‘Hey, here you go. Your paw paw is watching. Go play ball and get back to where you belong.’”

Almond is scheduled to report to the Missoula ball club May 14.

“My goal is to go out there and play well, hit like I did when I was there last time and win ball games. The end goal is to get back to affiliate baseball. I don’t care who or where it is…I didn’t want COVID to be the one to say I was done playing ball.”