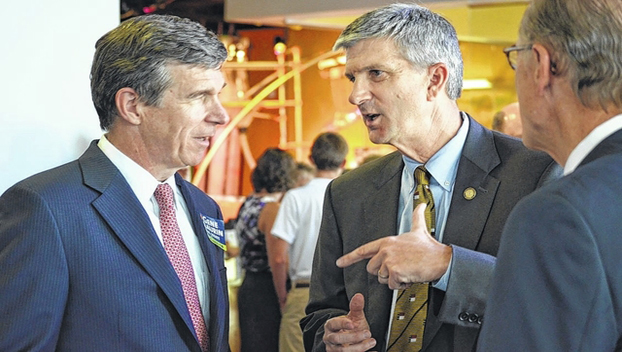 Stanly County has another connection in the state in its corner.

“I’m obviously honored that the governor appointed me to lead the EDP,” McLaurin said.

The organization has a 17-member board and 65 employees. It focuses on five areas of helping serve the state: business recruiting, industry support, small business advisory assistance, international trade and Visit North Carolina.

McLaurin said the organization assists businesses in a variety of ways.

“We’re the first point of contact for someone who is interested in coming to North Carolina,” McLaurin said. “We help North Carolina companies that are looking to expand. If somebody wants to start a small business, we have people on the phone who can help them in the process of starting a small business.

“We answer over 20,000 calls a year doing that,” he said of small business interest.

As for the international trade, McLaurin said it aides companies in growing their sales from exports.

Visit North Carolina is “a team that helps promote tourism in the state,” he said, adding that it also assists with film production companies looking to use North Carolina as a backdrop.

“I know rural North Carolina, this is where I’ve lived, where I’ve served,” McLaurin said. “You’ve got somebody that knows Stanly County really well. I’ll certainly be doing all I can for Stanly County, but I’m going to be helping all of the counties across the state.”

“Anytime someone from our region of the state is in a position of economic development leadership it is positive for Stanly County,” Lowder said. “Mr. McLaurin is keenly aware of our skilled workforce, building and land assets and infrastructure which is advantageous. Our local economic development office, workforce development partners and elected officials will stay engaged with Mr. McLaurin to ensure he is familiar with all of our progress and opportunities.”

McLaurin has served on the board since 2017 and has served as its vice chairman.

He continues in his role as the president of Quality Oil Company, which has offices in Rockingham, Laurinburg, Wadesboro and Lumberton. McLaurin has served eight consecutive terms as mayor of Rockingham and one term in the North Carolina State Senate. He was president of both the Richmond County Chamber of Commerce and the Rockingham Rotary Club and was named Richmond County Citizen of the Year in 2014.