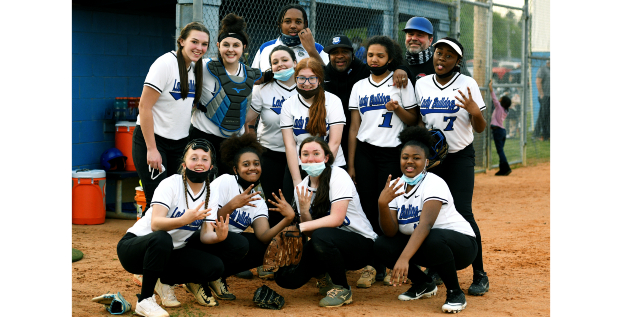 The Albemarle softball team celebrates this week after ending a 35-game losing streak with a win over South Davidson. (Contributed by Rick Sammons)

Albemarle’s varsity softball team had not had a lot of success in recent years in terms of wins.

Riley Dennis, a freshman pitcher, took the mound for Albemarle in Tuesday’s home game against South Davidson. In her first high school game, Dennis struck out each Wildcat batter at least once in a 6-5 win for the Bulldogs.

“Riley is a special talent and has great maturity,” Albemarle head softball coach Marc Raye said. “She is ahead of the game. The poise she showed was pretty special.”

Albemarle (1-0, 1-0 YVC) led early and later added a key run when Peyton Pratt on a full count delivered what proved to be the game-winning RBI.

“My girls withstood a small storm in the game and came out victorious. They looked adversity in the face and said, ‘We will not break,’ ” Raye said.

Raye said he was excited about the Bulldogs this season, saying the team’s lone senior, Makiyah Tyson, brings great speed and experience to the field.

“These girls have been through a lot the past three years, and I am not the best coach, but I am a coach that demands the best out of my players. It does not matter what sport it is,” Raye said. “I believe in every kid; we have to get them to believe in themselves.”

Albemarle’s head coach said he told parents to “trust the coaching staff and allow us to grow their child as a student-athlete and person. I think we are gaining their trust, and having a win to go with it helps a lot as well.”

The Bulldogs will be back in action April 12.