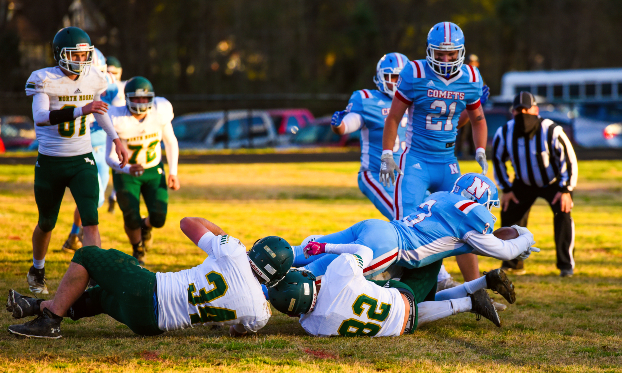 North Stanly running back Karee Dykes stretches across the goal line for a two-point conversion in Thursday's 36-7 win for the Comets versus North Moore. (Photo contributed by Dawn Lucas)

North Stanly took the early lead and never trailed, winning the YVC title with a 36-7 win over the Mustangs.

The title is the third for the Comets (5-0, 4-0 YVC) in four seasons under head coach Scott Crisco.

Thursday’s win was also the final one for North Stanly in the 1A Yadkin Valley Conference. The Comets will move back to the 2A classification next season and be in a new conference after realignment. North Stanly’s new football conference opponents will be Albemarle, South Stanly, Union Academy, Jay M. Robinson and Mount Pleasant.

Crisco said he told the team before the game winning the title “would be a good way for us to go out of this conference…go out with a bang.”

The coach also noted this year’s senior class was 23-1 in conference play the past four seasons. The only loss North Stanly’s seniors suffered in the YVC was a loss to North Rowan in 2019.

“We came into this season with a chip on our shoulders,” Porter said about the playoff loss. “We all went to camps…we had to get our minds right to get that chip off of our shoulder. Tonight showed all the anger we had.”

He added the Comets should play like that “every single time we play. We have to play like that. If we don’t, we won’t make it far in the playoffs.”

Porter talked about his feelings for the school and his teammates.

“I love my school. I’ll always remember how I played and how we played as a team…we have a brotherhood,” Porter said.

Crisco said winning the title this year has been about more than just the past few weeks. He referenced limited time in summer practice and in the fall.

“There was a point there when none of us thought we would get here,” Crisco said, referring to playing the season.

“We told our kids, ‘Play each game like it’s your last game.’ We were not guaranteed a game every week,” Crisco said.

“We say we have Karee and Christian for our thunder and Cam for our lightning,” Crisco said.

North Stanly’s defense has allowed 30 points in five games, including seven points in the title-clinching win. The Comets limited North Moore (3-3, 2-2) to 81 net yards including -7 net yards in the second half. The Mustangs’ only scoring drive was a 17-play, 80-yard 10-minute drive which took up most of the second quarter.

Linebacker Meliek Bryant said the Comets “had to play fast” on defense, which helped win the game.

Crisco credited his defensive coaches, saying they “spent a lot of time this week breaking down gap assignments. We were ready this time.”

North Stanly scored the first two touchdowns of the game, then scored 21 unanswered points, including a 90-second drive in the final two minutes of the first half.

Shaver was 9-of-17 through the air for 132 yards and had a short TD pass to Clayton Shue in the last minute of the second quarter.

Cooper Hogan, who led North with three catches, credited his team’s offensive line for getting a good push up front.

North Stanly will host Forest Hills in a non-conference game Friday night at 6:30. The Comets will also get one of the four top bids in the state playoffs when the brackets are released the Saturday after the regular season.