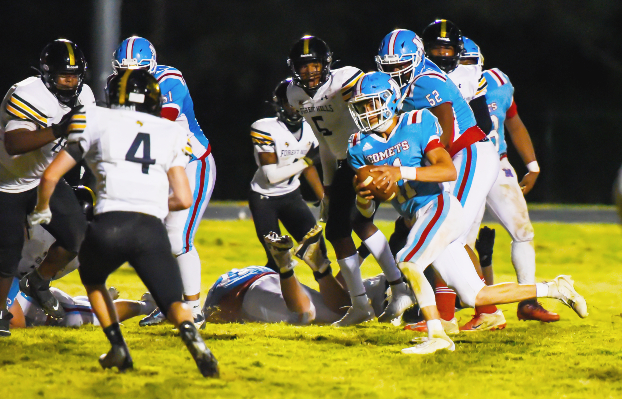 Forest Hills, who lost two conference games because of other teams being in quarantine, traveled to take on the Comets. North Stanly also did not have its final conference game of the season against South Stanly, who was also quarantined.

The Comets’ defense produced points early in the game and led North to a 43-21 win over the Jackets.

North Stanly (6-0) won its first game against Forest Hills (2-5) in the last 18 matchups with the Jackets dating back to when both were in the Rocky River Conference. The Comets’ last win over the Jackets was a 14-7 win in 1983.

The victory for the Comets also meant this year’s team posted the first undefeated regular season in football in school history.

North’s defense started the game with a safety when Zyon Goode tackled Jackets QB Jayden McDougall in the end zone early in the first quarter. The score was set up by precision punt coverage as the Comets’ Josh Lucas pinned Forest Hills at the two-yard line.

The pendulum swung into North’s favor early in the second quarter as the Comets’ defense provided points. Forest Hills, trailing 8-6 late in the first quarter, returned a kickoff down to the Comets’ 30. Three plays later, the Jackets tried a screen pass, but North linebacker Drew Hatley smelled out the play.

Hatley jumped the route and picked off the pass, running full speed, and did not stop until reaching the end zone 82 yards later.

“The entire defense has been playing lights out the past couple of weeks,” Crisco said. He added the team’s punt coverage has been strong as well, noting the safety, North’s fifth of the season in just six games.

Along with the defense putting points on the board, Comets quarterback Luke Shaver had a huge night. The junior threw for a career-high 269 yards on 11-of-19 passing with two touchdowns and one interception.

Shaver completed passes to seven receivers, including Cooper Hogan, who had three catches for 85 yards and a touchdown. Stefan Harris had 91 receiving yards on two catches, including a 60-yard TD in the second half.

North’s quarterback credited Friday’s efforts to he and assistant coach Noah Crisco looking at film of the Jackets.

“We figured out what defenses they were going to run and how to pick them apart,” Shaver said. “We have great receivers that can make plays and an offensive line that blocks great.”

“(Forest Hills) pushed so many people back trying to defend the pass. It leaves the middle of the field and the flats wide open,” Shaver said.